Stephen Hester has today signalled that Royal Bank of Scotland will make a loss this year. 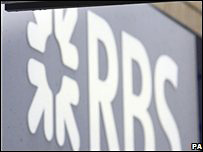 In an interview with me for the Today Programme, the new chief executive of the battered bank said that "people may conclude that profits will be difficult to achieve" for 2008 and that it "wouldn't surprise" him if analysts forecast a loss.

And although we've become inured over the past few months to the world's biggest banks announcing losses, it's still momentous that RBS is heading for the first full-year loss in its history.

After all, RBS owns NatWest. It's supposed to be solid and dull, concentrating on providing very basic banking services to millions of individuals and businesses.

Banks like RBS aren't supposed to make losses, ever.

So where did it all go wrong?

Well Hester puts the blame squarely on "leverage", on the RBS's decision to lend far too much in the boom years.

It became far too exposed, though its investments, to those disastrous subprime loans to US homeowners with poor credit histories.

RBS increased this exposure through its imprudent, top-of-market takeover of a huge chunk of the giant Dutch bank, ABN.

But, perhaps as damningly, it provided excessive loans of a more mainstream sort to businesses and households that are beginning to have difficulty keeping up the payments.

So RBS - like HBOS - has just survived one set of multi-billion pound losses on the subprime phase of the credit crunch. And it's now being tested by rising impairment charges on more conventional lending, because the recession into which we're careering is making life tough for those with big debts.

That's why Hester was parachuted in as new chief executive. That's why RBS has gone cap in hand to the Treasury for £20bn of new capital from taxpayers.

Hester is determined to fix the bank, and fast. There will be job losses, he told me. Assets will be sold.

And he's desperate to redeem the £5bn of preference shares he's selling to the taxpayers as quickly as possible, so that he'll regain the freedom to pay dividends as and when he likes to shareholders.

He said that he would be "disappointed" if he couldn't pay dividends in 2010.

Strikingly, he didn't sound like an executive who feels that his room for manoeuvre is being excessively constrained by the supposedly stultifying interference of the Treasury.

He does, for example, believe that he can make increased credit available for small businesses and house purchase, as the Treasury wishes - although he's not promising that the credit will be cheap.

Here's the odd thing. Although it's profoundly humiliating for RBS that it's heading for a loss, in a way that's history - the inevitable consequence of previous mistakes.

RBS's darkest hour was a few weeks ago, in late September and early October, when the entire banking system was close to total paralysis.

As Hester conceded, a number of big banks suffered a flight of vital funds that took them to the brink of collapse.

RBS - and others - have been bailed out by taxpayers, to the tune of £5,000bn in support provided by governments across the world.

Without that support, Hester would now be - in essence - a financial undertaker, rather than a chief executive determined to restore strength and resilience to a pillar of the British economy.