Barack Obama's economic and business policies are, on paper, more conventionally left wing than those of Gordon Brown. 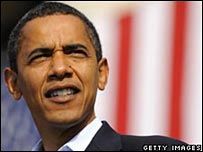 a) a windfall tax on the "excess" profits of oil companies;

b) a redistributive tax cut for those on middle and low incomes, funded by a claw back of tax cuts received by the wealthiest 2% during President Bush's two terms;

d) subventions for renewable energy and for the development of green technologies, especially in the automotive industry;

g) curbs on what credit-card companies can charge and increased rights for homeowners struggling to pay their debts.

In theory, it represents a significant shift of money and power from private sector to public sector and from the super-rich to those on middle and low incomes.

In a UK context, Obama's decisive victory may provide cover for a leftward move by the Labour government, to the delight of many Labour MPs and the anxiety of many in the City and in business.

Because Obama may turn out to be less red in the practice of his presidency than his words and aspirations would imply.

For example, on that windfall tax - which much of the Labour Party would love to see imitated here - there's already been a strong hint from Obama's advisers that it's on hold, following the collapse in the oil price.

That said, the oil giants have been making stupendous, record-breaking profits. And if Obama were to fail to skim off some of these, it's difficult to see how and where he will raise the money for his significant tax cutting and spending commitments.

The point is that he is inheriting an economic estate that has been pillaged by his predecessor.

US public sector debt is well over $10,000bn, equivalent to around 80% of US economic output (roughly double the share of GDP taken by our government's debt - though most economists would say that the Treasury significantly understates the British national debt).

And the rising burden of bailing out America's battered banks and financial institutions means that US government debt is on a strong rising trend.

That worries foreign investors who are supposed to buy all this debt in the form of US Treasuries.

If these investors see no realistic prospect of Obama cutting public borrowing on any meaningful time horizon, that would put further downward pressure on the dollar against the currencies of China, Japan and the eurozone (though probably not against sterling, since the UK is perceived to have too many structural weaknesses in common with the US).

Which perhaps would be no bad thing for US exporters. But it would be a problem if it led to a painful rise in the cost for Obama's administration of servicing all that debt.

The US government, US banks, US consumers and US business all remains precariously dependent on borrowing from Asia and the Middle East.

The urgent need for the US to become more financially self-sufficient, for its economy and the global economy to be better balanced, may conflict with Obama's determination to spend in order to make his country (in his view) a fairer society.

UPDATE, 13:50: Whoops. Mea culpa. I omitted a "0" from US national debt in the initial published version of this note (if you're a creditor of the US, I guess you might mind if nine trillion dollars was wiped from what it owes by a missing keyboard stroke).