Barack Obama said last night that he would do "whatever it takes" to "avoid a deepening recession" and that "we shouldn't worry about the deficit next year or even the year after." 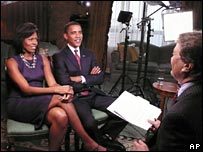 This commitment to pull out all the fiscal stops to avoid a slump, in a recorded interview for CBS News's "60 Minutes", was probably music to the ears of Gordon Brown.

After all, if the US cuts taxes, increases public spending and borrows as if there's no tomorrow, surely that provides cover for the UK to do something similar next Monday in the Pre Budget Report.

But does it? It probably provides political cover. "What's good for America is surely good for us," will be a natural conclusion for many to draw. And in the sense that the whole world would benefit if America's downturn could be a short and relatively shallow one, that would be correct.

It would, however, be potentially dangerous to assume that America's economic policy can simply be replicated in the UK - because, and this is perhaps deeply unfair, international investors condone apparently reckless fiscal behaviour by the US, while punishing similar behaviour by other economies (such as ours).

For all the damage over the past eight years to America's reputation for sound economic stewardship, the dollar is still the world's reserve currency.

Its public sector debt is well over $10,000bn, equivalent to around 80% of US economic output - which is double the share of GDP take by UK government debt (albeit on official figures that many would say understate the true level of British public-sector liabilities).

What's more, even before the advent of Obama, the US national debt has been on a strongly rising trend.

And yet given a choice between buying dollars and pounds, international investors have been opting for the greenback - and how. The value of sterling against the dollar has fallen by a quarter in just the past four months.

Or to put it another way, the US - still the world's biggest and most powerful economy - plays by its own rules. Rightly or wrongly, it is perceived to be fundamentally more robust than our economy. Which means that the US can live beyond its means to a greater extent and for longer than the UK, and yet be spanked less by international investors.

So some will feel it's a little unfair that so much opprobrium has been heaped on the head of George Osborne, the shadow chancellor, for warning that there's a risk of a damaging run on the pound, in the event that our national debt was perceived to have escalated to worryingly high levels.

Maybe, locked in the bowels of the Treasury, there is a secret book of fiscal and monetary etiquette that defines what chancellor and shadow chancellor may say at times of economic crisis. Maybe Osborne has committed a terrible breach of the Treasury's club rules, the equivalent of passing the port in the wrong direction.

That said, perhaps it was the furious reaction of ministers to Osborne's remarks that was more telling, in what it implied about their fears for sterling's vulnerability.

In that context, what mattered more for Brown than Obama's "I-heart-debt" vow was the statement by the G20 group of leading economies on Saturday night that they would "use fiscal measures to stimulate domestic demand to rapid effect."

What would suit the UK would be a massive increase in borrowing by all our competitor economies. Because if all economies were perceived to be shackled by mad levels of public-sector debt, then there would be no reason to single out the UK as being unusually burdened by the expense of service its borrowings.

But even then, the competitive position of the UK in an international beauty contest for investors' cash isn't brilliant.

Right now, our economy appears to be contracting more than that of any other major economy (a view reinforced by the CBI's forecast this morning that the UK's GDP will shrink 1.7% in 2009).

And although there are concerns about whether the eurozone economies will cohere at a time of such global stress, money managers right now prefer the apparent safety of investing in a currency, the euro, that pertains to a huge economy, rather than in sterling and the smaller British economy.

Which is why on the Ten O'Clock News last Thursday I highlighted sterling's weakness against the euro as a particular concern.

As for the other part of the G20's statement, on making financial markets safer and improving the regulation of financial institutions, Gordon Brown can take some satisfaction that the blueprint is similar to what the UK wanted.

Even so, he may regret getting what he wants. There will be significant costs to the UK over the next three to five years - and perhaps longer - of putting the financial economy on a sounder, more stable footing.

The G20's insistence that all financial institutions - from banks, to insurers, to hedge funds and private equity - should hold more capital and more cash means they will conduct less business and will generate significantly reduced profits.

The City of London will shrink. And what was for many years the engine of the British economy, generating a third of economic growth and a significant proportion of tax revenues, will be running at 30mph, not 90mph.

There is a cost to making the world a safer place. And much of the bill is being picked up by the UK.

UPDATE: Thanks to UltraTon for pointing out typo in paragraph three, now corrected.