The overnight bailout by the US authorities of Citigroup is big and fairly complicated, but then it had to be: until recently Citi was the biggest bank in the world and even today its assets are not far off the size of Britain's economic output. 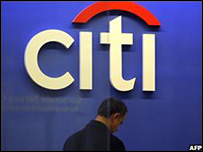 Citi has been undermined by its hugeness and global reach, which made it difficult to manage.

And it has near-fatal exposure to the shattered US housing and commercial property markets.

So to reassure those who provide vital credit to Citi, its lenders and depositors, the US Treasury and the Federal Deposit Insurance Corporation have said they will absorb a proportion of future losses on $306bn of dodgy mortgages and mortgage-backed securities.

And the US central bank, the Federal Reserve, is providing a "backstop" borrowing facility, just in case other creditors lose confidence and pull out their funds.

Also the US Treasury will inject $20bn of new capital into the bank in exchange for preferred stock.

In this complicated deal, the US authorities receive a further $7bn of preferred stock by way of a fee and warrants to buy ordinary shares.

The other "quid" for this very substantial taxpayer-funded "quo" includes prohibitions on all but token dividend payments on the ordinary shares and controls on executive compensation.

So this is the end of Citigroup's cherished commercial freedom, its long swaggering history of bestriding the globe as a banking giant.

This proudest of US banks has been humbled: the rescue is about as close to nationalisation as it's possible to get without the state taking 100% ownership.

And the deal is likely to presage a massive shrinking of its international operations, so that it eventually becomes a smaller, simpler operation, more suited to our newly sober age.

Over the weekend, there have been plenty of other manifestations of why so many of our heads are sore after the borrowing binge turned to bust.

Woolworth has been negotiating with its bank creditors and with a buyout firm, in an attempt to avoid being put into administration under UK bankruptcy procedures.

According to those close to the negotiations, even on a best case outcome up to 20,000 jobs could be lost at the iconic and battered retailer and more than 500 stores could be closed and sold.

Then there's the plight of all those overseas businesses that manufacture cars in the UK.

They're being mullered by a massive contraction of available credit and a collapse in sales.

So Jaguar and others want to borrow from taxpayers, since they can't borrow easily from banks or on wholesale markets.

Part of what they've requested is access to the Bank of England's special liquidity scheme which allows banks to swap mortgage-backed securities for Treasury bills (which can be turned into cash).

The motor makers want to exchange bonds or securities backed by car loans for Treasury bills - which would help them provide finance to those who might still want to buy a car, in spite of the inclement economic weather.

If you're shocked by the thought that we as taxpayers may soon be financing car purchases, don't be. You may recall that on 11 November I pointed out that VW said it was trying to exchange securitised car loans for £2.2bn from the European Central Bank (see my note, "The Rising Taxpayer Burden").

And in the US, the Federal Reserve is providing short term loans to all manner of big companies, including motor manufacturers, by buying up their commercial paper.

Governments and central banks all over the world are standing in for dysfunctional financial markets and providing financial support to large but humbled private-sector businesses.

Oh, and then there's the small matter of the UK's national debt, which is rising at a dizzying speed.

With public-sector borrowing in 2010 and 2011 expected to be equivalent to well over 8% of our economic output in each of those years, there's a serious risk that sterling will be shunned by international investors - which could lead to a painful increase in borrowing costs for our government, and perhaps even difficulties in financing the deficit.

So, in a way, the most important bit of today's pre-Budget report won't be the eye-catching tax cuts - which will be implemented more-or-less immediately.

These rises in tax rates and reductions in public expenditure would need to be both credible and substantial, to minimise the risk of a run on sterling and of a crisis in the public finances.

So what do you have when you put together all the new information to be digested this morning on the ailing patient, the global economy? Just another manic Monday.