Barclays has sold the £500m of Reserve Capital Instruments that it clawed back from the royals and state investment funds of Abu Dhabi and Qatar.

Bored with what you've read so far?

Well it may be worth reading on, because in a way it's shocking that Barclays found buyers for this stuff - because it raises questions about why the bank gave away around £300m in commissions and warrants to Gulf investors who aren't exactly short of a bob or two. 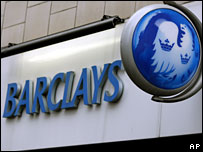 When Barclays only 19 days ago sold £3bn of these Reserve Capital Instruments (RCIs) to Qatar and Abu Dhabi, it threw in warrants to purchase 1.5bn new Barclays shares at any time in the next five years at a price of 197.775p each.

According to Sandy Chen of Panmure Gordon, each of these warrants is worth around 16p, which would value the lot at just under £250m (and, by the way, some analysts have argued that the warrants are worth a good deal more than this).

In other words, Qatar and Abu Dhabi were paid a bit more than £300m for buying £3bn of securities - and these securities pay a stonking 14% rate of interest until June 2019 (many of us would love a bank to pay us that kind of interest).

Other investors yesterday bought £500m of the RCIs without the inducement of the warrants or the cash commission.

Perhaps unsurprisingly, although Qatar and Abu Dhabi were prepared to release £500m of the warrants for sale to other investors - following complaints from British investors that they should have been offered these in the first place - the Gulf investors didn't give back any of the commission or warrants.

Qatar and Abu Dhabi therefore ended up being paid over £300m for taking even less risk on their investment in Barclays.

It's worked out very nicely for them indeed. Now there's a proven appetite for these RCIs, they could presumably sell the rest on the open market, should that be appealing to them. In which case, the £300m would become pure profit attached to zero investment risk.

So why on earth did Barclays less than three weeks ago feel it had to pay so much money to Qatar and Abu Dhabi, to persuade them to buy these securities?

Well, it points out that market conditions were fraught at the time.

But there was no urgent rush to raise the money. As Barclays told me back then, the Financial Services Authority had given it till early next year to raise the capital it needed.

Arguably therefore Barclays has needlessly given away £300m.

And don't think this is about losses suffered by funny, remote people in the City with no connection to you.

It represents an erosion of wealth for millions of us saving for a pension, since most of our pension funds and life companies have an interest in Barclays.

You should be concerned.

Could the board make amends? Well Barclays' four executive directors have volunteered to forego their bonuses.

But they would probably have to do without bonuses for around 10 years to compensate for the shareholder wealth given away in this transaction.

Which means that the decision by the board to offer itself up for re-election may turn out to be more than a symbolic gesture.

In particular, there is likely to be pressure on the chairman, Marcus Agius, to explain why he and the non-executives permitted the deal with Qatar and Abu Dhabi to be transacted on such generous terms.