The slightly odd thing about Mervyn King's speech last night is that it didn't address the issue of what the central bank, the Bank of England, could do better next time. 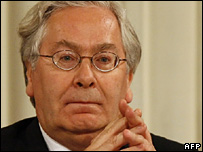 King's analysis of what went wrong is spot on, as always.

In a nutshell our banks and other financial institutions lent too much against the security of over-valued assets, largely residential housing and commercial property.

And to obtain the funds they lent to households and business, those same banks were too dependent on credit from wholesale and overseas sources (net wholesale funding of our banks went from zero in 2001 to £625bn by the end of 2007).

So when the penny dropped that the value of houses and property was falling fast, two terrible things happened at the same time: the overseas and institutional providers of all that incremental funding wanted their money back from our banks, because the formal or informal collateral underpinning that funding was shrinking; and the capital foundations of the banks were eroded by actual and prospective losses on loans that had been made into those frighteningly pumped-up housing and real estate markets.

Banks have been living with this devastating combination of a liquidity crisis and a solvency crisis since the summer of 2007. At times, the symptoms of the disease have been relatively mild. Since the beginning of September, after the collapse of Lehman, the entire banking system was almost in its death throes.

And it's not just been a British disease. This near-deadly combination of banks that lent too much to finance the purchase of inflated assets while being dependent on capricious, unreliable wholesale funding has afflicted the US, other Western economies and - as the extreme case, the sickness in its purest form - Iceland.

Which is why governments and central banks all across the world have adopted similar remedies for their banks: injections of new capital; guarantees from taxpayers to providers of wholesale funds to persuade them to keep their money in the banks; and massive taxpayer-backed loans from central banks.

Few, I think, would dispute that these are the right remedies, although there is a question about striking the right balance between capital injections and the provision of liquidity or cash.

But although the patient, the banking system, is no longer close to death, it's not out of bed and handing out squillions to anyone able to utter those fateful words, "can I have a loan please?"

Nor, with any luck, will there be a return to the lending mania of the few years before the Crunch, or at least not for a long long time.

But there can be no growth in the economy while banks contract the credit they provide to companies and households.

And the reluctance of banks to lend will continue until they're confident they can see the bottom of the fall in asset prices - and we're not there yet.

Also, all that extra money that we as taxpayers have lent to the banks and invested in them (some £600bn and rising) will have to be repaid: that too acts as a serious constraint on how much our banks can lend to businesses and individuals.

Which brings me back to where I started, which is what the Bank of England and other central banks could do better next time.

What was important for me about Mervyn King's speech was that he conceded that our woes stem from a borrowing binge that both fed and fed off the over-valuation of our housing and property markets.

But shouldn't the Bank of England and other central banks have curbed that binge before it became near-lethal?

When in the spring I put this point to King's deputy, Charlie Bean, and also to Jean-Claude Trichet, the president of the European Central Bank, they both said - in essence - that they don't have the tools, that raising interest rates to put a brake on house-price rises or on the growth of credit would have had unfortunate consequences for the wider economy.

And, in the case of the UK, to have hiked interest rates to stem the bull-market in houses and property would have led to the Bank of England undershooting its inflation target in a way that would have been deemed a failure under the mandate it's been given by the Treasury.

The Tories have talked about giving the Bank of England the power to vary the capital ratios of banks depending on credit conditions, which is a fancy way of saying that the Bank of England would be able to force banks to lend less in a period of economic euphoria.

Many will say that's by no means bonkers - although there are immense practical difficulties in devising a credible framework for the Bank of England to exercise such new powers.

Perhaps the important point is that the ultimate strength of any economic recovery will depend in part on all of us regaining confidence not only in the robustness of our banks but also that our central banks have regained the ability to deliver a stable economic environment of low inflation and steady growth - and the important word here is "stable".

It would be impertinent to suggest the theme for Mervyn King's next speech. But he would, I think, attract a large audience for his thoughts on how and whether the Bank of England can prevent the next credit binge and asset bubble.

UPDATE, 11:21AM: Crikey. At a time when some have questioned whether central banks have lost their power, Mervyn King still moves markets.

Sterling has plunged overnight and this morning - especially against the dollar, where it fell from $1.67 to $1.62 at one stage.

That's going to hurt a few traders and speculators, and may nudge inflation up a bit.

Which, in the typical mad fashion of financial markets, reduces the likelihood of the very prospect that has bashed sterling in the first place - namely the expectation, based on King's speech and this morning's minutes of the Monetary Policy Committee, that the Bank of England will cut interest rates again in the coming weeks.