I've been desperately scrambling around for something positive to say today - and the best I can come up with is that the remarkable fall we've seen in the value of sterling today (again) shouldn't make the Bank of England so anxious about importing inflation that it postpones the widely anticipated further cuts in interest rates.

The Scarborough Evening News is responsible for this insight (if such it proves to be), because it contains some striking remarks by the Deputy Governor of the Bank of England, Charlie Bean:

"This is a once-in-a-lifetime crisis and possibly the largest financial crisis of its kind in human history" said Bean. "In terms of the impact on the real economy we are still in early days."

Those do not seem to me to be the views of an economist whose main anxiety is the outlook for inflation. They're the words of a central banker worried about the possibility of a deep dark slump. 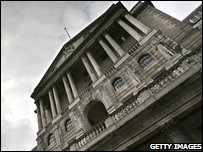 f the Bank of England doesn't cut a further ½% off the policy rate - either at its next meeting or in another round of global cuts in co-ordination with other central banks - I'll be somewhat surprised.

Also, some of sterling's weakness can be seen as the corollary of dollar strength, rather than a wholesale decision by international investors to shun sterling assets.

The dollar and the yen have both risen today as the last vestiges of the years of the carry trade - in which investors borrowed cheaply in yen and dollars to invest in emerging economies - is unwound.

Hedge funds and other institutional investors are liquidating any assets they perceive as even mildly risky, especially in eastern Europe, Russia and South America (see my note on this yesterday, "Now there are runs on countries").

And such liquidation inevitably leads to purchases of the US and Japanese currencies.

But just because part of sterling's weakness reflects a flight to the safety of the dollar and yen, there's no real comfort there for us.

Sterling today hit a record low against the euro and is at a 12-year low on a trade-weighted basis.

Why don't international investors love our currency any more?

You know where the smell is coming from:

1) our huge and tumbling housing and property markets;

3) a fast-growing budget deficit that has to be funded by massive sales of sterling government bonds, at a time when central banks, sovereign wealth funds and institutional investors are suffering a squeeze on cash available for such investment (Michael Saunders of Citigroup estimates that the Treasury will have to flog around £100bn net of gilts every year for the next three years - which, as a percentage of GDP, takes us back to the horrible deficit years of the early 1990s);

4) oh yes, and we appear to be in recession.

Now the capital flight out of the UK is mild compared with the currency crisis hitting Eastern Europe and Russia, which may well be translated into severe economic difficulties.

But all that means is that we shouldn't expect vast numbers of the recent émigrés from those countries to return home when the job market tightens here.

If Poles have a choice between being unemployed here or in their homeland, it's not obvious they'll all decide to repatriate.

But while we are on the subject of the vulnerability of Eastern European, Russian and South American economies, here's something positive to say about our banks: their loans to these regions are limited.