If the patient is the financial economy, here's a smattering of the latest worrying symptoms.

1) National Savings has been overwhelmed by calls from anxious savers wanting to lend their money to HM Treasury rather than keep it in a high street bank. And there's also been such a rush to place deposits in taxpayer-owned Northern Rock that it's had to suspend its more attractive products and is turning money away. 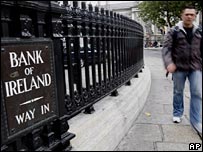 2) There's been a flight by some British savers to the safety of Irish banks, where deposits are 100% protected by a government guarantee. And here's an odd thing. Yesterday Ulster Bank, a subsidiary of Royal Bank of Scotland, was given 100% deposit protection by the Irish government, on the same basis as the independent Irish banks. So it's now safer for both wholesale and retail depositors to put their money into Ulster Bank than into RBS's NatWest subsidiary in the UK.

3) Austrian, South African and US mints are working 24/7 but still unable to press enough gold coins to meet soaring demand.

4) As I disclosed on the Ten O'Clock News last night, British banks urged the chancellor and the governor of the Bank of England at a hastily arranged meeting on Tuesday to please please let them swap their car loans, their loans to companies, their commercial property loans for cash from the Bank of England - because of their deep concern that wholesale funds are draining from the system. The banks felt they received a sympathetic hearing from the chancellor and a relatively hostile one from the governor. The banks fear, perhaps guiltily, that Mervyn King's understandable desire to see them spanked for their past sins and deterred from repeating their errors could turn out to be a capital punishment (smack! - no more banks).

5) Those same banks told the chancellor that their real vulnerability isn't the instability of retail savings, or the fear that the likes of you and me will move our modest amounts of cash. What really worries them is that huge wholesale deposits made by professional money managers are harder and harder to retain. And what the banks warned is that the Treasury may find itself having to follow the example of the Irish by guaranteeing retail and wholesale deposits (though the Treasury is reluctant to do this, because of how it would automatically lead to a ballooning of the national debt).

And now for the complicated and scary stuff. Today is the beginning of "auction season", when the International Swaps and Derivatives Association starts a series of auctions to settle who pays what to whom on a plethora of credit derivative contracts relating to businesses that have gone into default.

It's settlement time on those humungous insurance policies for corporate debt, called credit default swaps, which I've mentioned to you as being another potentially lethal flaw in the financial economy. 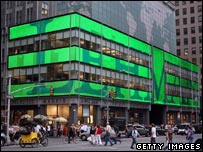 In the coming three weeks, payouts of hundreds of billions of dollars may be made - or at least demanded - to cover losses arising from the defaults on the debt of Fannie Mae, Freddie Mac, Lehman and Washington Mutual.

Sandy Chen, the analyst at Panmure who's been a smart predictor of credit-crunch accidents, estimates that payments on Lehman's battered bonds could be as much as $350bn.

Now the problem here is that for every beneficiary of these payments, there's an underwriter - those who provided the CDS insurance - which has to find the cash. And, as I've pointed out, this was a largely unregulated market, so the great fear in markets is that some underwriters have insufficient capital and will simply collapse when the claims are made.

That in turn would hurt financial institutions expecting to be paid out on their CDS contracts and damage others with separate exposure to the collapsed businesses. The shock to the system could be very severe.

To compound the current anxiety about all this, the CDS market is so opaque that it's impossible to know right now who is holding the radioactive baby.

This gigantic CDS mess has contributed to the seizing up of money markets in recent weeks, the tendency of all banks and financial institutions to hoard cash - because no-one knows who or what may be vulnerable during the CDS auction season.

That, as if you needed telling, is just one more reason why the US $700bn bank bail-out is no panacea, even if we should be relieved that it has passed its first Congressional hurdle.

The financial weather ahead remains stormy and unpredictable.

PS. The most significant British corporate announcement today was that Marks & Spencer is slashing capital spending, It was planning to spend up to £900m this year on improving stores, its supply chain and computer systems. That's being reduced to £700m - and next year it'll be slashed to £400m.

In other words, M&S will be placing far fewer orders than planned with other businesses - which will have a damaging impact on their profits and on the prospects for their employees.

That's a graphic illustration of how the horrors of the financial economy are infecting the real economy.