Rothschild "won't back down"

I have learned that Nat Rothschild is not going to back down in respect of the allegations he has made that Mr Osborne was interested in receiving a donation for the Tory Party from the Russian billionaire Oleg Deripaska.

He would be prepared to defend his claims in court - and I understand that one of his close friends would also provide testimony apparently supporting his claims. 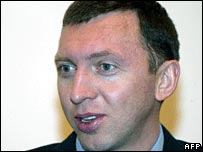 Mr Rothschild feels that Osborne has abused his friendship, by allegedly encouraging newspaper reports that embarrassed two of his other friends, Oleg Deripaska and Peter Mandelson.

The hedge-fund partner feels that friends who accept his hospitality should be entitled to feel that what they say and do in his home is private, and won't appear in the press.

Fairly or not, Mr Rothschild holds Mr Osborne partly responsible for media insinuations that have embarrassed Mr Mandelson and Mr Deripaska - such as that Mr Mandelson, who at the time was the European Union's Trade Commissioner, was guilty of a conflict of interest in accepting hospitality from Mr Deripaska on the aluminium magnate's superyacht

George Osborne was - until the past few days - a close friend of Mr Rothschild.

The relationship dates back to their days at Oxford University, where both were members of the raucous, public-school Bullingdon Club.

This summer George Osborne was Nat Rothschild's guest at his lavish property in Corfu for a fortnight. Mr Osborne's wife, Frances, stayed on at Mr Rothschild's house after Mr Osborne left.

During their stay, Mr Osborne was allegedly keen for Andrew Feldman, a Tory fundraiser, to visit them at Mr Rothschild's house.

When Mr Feldman was on his way, a decision was taken that they'd all go across and meet Mr Deripaska on his yacht.

Before they went on to the yacht, Mr Osborne and Mr Rothschild discussed the possibility of Mr Deripaska making a donation to the Conservative Party, according to someone present at the time.

This was a detailed conversation, which involved discussion of whether it would be against the rules for Mr Deripaska to make a financial contribution since he is not a British national.

The idea was mooted that Mr Deripaska could make the donation through a UK company he controls, LDV, which is based in the Midlands and makes commercial vehicles.

After Mr Feldman arrived, they all went out to Mr Deripaska's yacht on Mr Rothschild's dinghy.

According to one of those present, there was only a brief discussion then of whether Mr Deripaska would make a donation. This person added that they all stayed on the yacht for at least a couple of hours (this is disputed by Mr Osborne, who has said that his two meetings with Mr Deripaska have never last more than an hour).

After they returned to shore, Mr Feldman left to return to his family. But Mr Osborne then had dinner with Mr Rothschild. At this dinner, Mr Osborne allegedly talked more about the possibility of Mr Deripaska making a donation.

One of Mr Rothschild's friends is alleged to have witnessed most of these events and is prepared to testify to that effect, should the issue ever come to court.

Mr Rothschild has normally avoided the spotlight in his spectacularly successful moneymaking career.

As co-chairman of a hedge fund called Atticus, Nat Rothschild has accumulated a fortune of several hundred million pounds. He is a descendant of the world's most famous banking dynasty, and his father, Jacob, is a noted financier and patron of the arts.