The first thing to say about Nat Rothschild, whom I've met a couple of times, is that he is a tenacious, steely individual - who does not make allegations lightly. 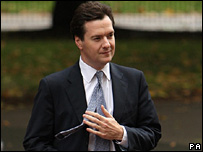 He's also extremely well-heeled, having made hundreds of millions of dollars as a partner of the New York hedge fund, Atticus.

Also I would not have described him as a Labour supporter.

So these allegations are not going to vanish into thin air as quickly as they've come.

I'd be amazed if Nat Rothschild were to retract what he's said.

Osborne stayed with him over the summer in his house in Corfu, when there was quite a gathering of the powerful and well-heeled: Rupert Murdoch's yacht was moored by the house, along with Oleg Deripaska's

Now, the allegation is that during that time Mr Osborne discussed a possible donation by Mr Deripaska to the Conservative Party.

The Tories have said they did not solicit such a donation. I suspect that much will hinge on that word, "solicit" - whether the donation was sought or simply offered.

What I have learned is that there were witnesses to these conversations.

And that if push came to shove, this won't be a case of the word of one man, Nat Rothschild, against that of another, George Osborne.

At least one of these witnesses would be prepared to support Nat Rothschild's version of events, were it ever to come to court.