The noted British investor, Anthony Bolton, recently announced that he had started buying shares again, on the basis that we probably weren't too far from the bottom of the market.

Part of his logic was that the average ratio of share prices to corporate earnings - what's known as the Price-Earnings Multiple - never reached particularly high and stretched levels in the bull market that immediately preceded the current stock-market slumps.

Unlike the late 1990s, when those price-earnings multiples went into the stratosphere because of mad expectations of the future profits to be generated by dotcom and tech businesses, the rise in stock markets from 2002 to 2007 was driven primarily by sharp rises in corporate profits, rather than a massive and unsustainable rise in investors' optimism about prospective growth rates for those profits. 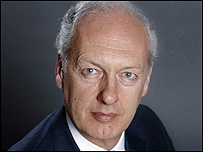 On Bolton's logic, stock markets ought not to fall too much from where we are now, because average price-earnings multiples shouldn't need to be squeezed too much as an adjustment to the more challenging economic circumstances that companies (and all of us) face.

But it only works if the earnings bit of the Price Earnings Ratios doesn't collapse.

And that's been worrying me for some time.

Because arguably the debt binge - the credit bubble that was pricked in August 2007 - was artificially inflating the sales, profits and per-share earnings of companies.

Well consumers and businesses famously bought and invested on credit that seemed cheap.

And companies also reconstructed their balance sheets to take on more debt, again because debt seemed much cheaper than equity, so by borrowing more in this way - what's known as gearing up - there was an automatic enhancement of earnings per share.

To recap, in the upturn the boom in corporate sales, profits and earnings per share were all magnified by the borrowing binge.

So here's why there may be no comfort to be had from the apparent reasonableness of bull-market corporate valuations, the relative narrowness of price-earnings multiples.

The earnings bit of that ratio may have been significantly and unsustainably inflated by the borrowing binge: the debt bubble may have precipitated an earnings bubble.

Now, as you all know, banks and other creditors want their money back, in a vicious process known as "deleveraging".

Companies that borrowed a great deal are now ruing the day - because the cost of their credit, if they're perceived to be vulnerable to the economic downturn, has soared.

And few consumers or business want to borrow to spend any more. 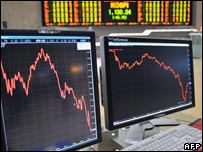 Profits are now being mullered in the vice of high and rising interest costs and falling sales.

In just the past few hours - as we've had official confirmation that the British economy contracted by a bigger-than-expected 0.5% in the three months to 30 September - we've had profits warning after profits warning from huge manufacturers coping with horrible trading conditions.

At the world's second largest motor manufacturer, Toyota, there's been a drop in quarterly sales for the first time in seven years.

Sony has cut its earnings forecast.

The number two car maker in Europe, Peugeot, has reduced its targets for full-years sales and profits. And Volvo AB reduced its forecast for growth in the heavy truck industry this year.

What we're experiencing is a global economic downturn caused by a massive contraction of the availability of credit.

It may shortly be confirmed as a global recession, and - because it's global and because it's origins are in the withdrawal of credit - it's unlike anything we've experienced since the 1930s.

Unlike the 1930s, our governments have both the tools and the knowledge to stave off depression, so it's fair to assume we're in for years of poor economic performance but not serious impoverishment.

That said, I'm not sure many quoted companies can be confident they know quite how far their profits will fall before the inevitable bounce.