The big vulnerability of British banks does not come from the danger that retail depositors, the likes of you and I, might shift our money around.

In the end, it's not practical for most of us to move our funds abroad - although we can and do move our money from banks we deem to be weak to those we see as strong, which obviously undermines the weak banks.

No, the big flaw in the British banking system is the way it became massively dependent on the money markets and wholesale funds.

Bank of England figures show that at the end of last year, there was a £625bn gap between the money lent by our banks and what they took in from conventional deposits. 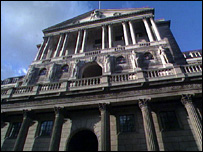 That gap shows their dependence on wholesale markets - which have seized up and are very difficult for our banks to tap.

And, to be clear, this dependence on wholesale markets was a problem of the banks' recent making, because as recently as the beginning of 2001 the funding gap was zero.

Over the past few months, much of that gap has been filled by loans from the Bank of England.

In fact figures published just this afternoon showed that the Bank of England's direct loans to our banks jumped £49bn in just one week - and, including the special scheme that allows the banks to swap their mortgages for Government bonds, the authorities' financial help for the banks has grown more than £200bn in the past couple of years.

It's a sort of nationalisation of our banks by stealth.

However the banks told the Governor, Mervyn King, on Tuesday evening that they need even more cash from him, to avoid falling over.

Part of the problem is that as these wholesale loans become due for repayment, they're not being rolled over - which makes the banks ever more desperate for help from the Bank of England.

But King's not keen to forgive the banks for their past sins and bail them out even more than he has been doing. He views them rather as a parent sees a mischievous child, as needing to be taught a lesson.

And rather like upset sulky children, an extraordinary number of bankers have said plaintively to me over the past couple of days that "Mervyn really doesn't get it" - which is as much as to say that the mess they've made is far too big for them to clean up without his help.

The Chancellor rather agrees with the bankers. He is increasingly taking the view that although there may be a time for spanking the banks, this is probably not it - because the priority is to restore them to some semblance of health.

So there's a spot of tension between Chancellor and Governor, which is probably a bit more than then normal rivalry between Treasury and Bank of England - although officials close to them say that King seems to be less inflexible than he was.

As I pointed out this morning, at issue is the range of collateral the banks can provide in return for loans from the Bank of England.

King only wants the best quality assets as collateral - which is understandable, since he wants to protect his balance sheet and the interests of taxpayers.

But the banks are running out of the good stuff, and now want to swap commercial property loans, loans to companies and car loans for readies from the Bank of England.

This may sound tedious and technical.

But it really matters to all of us.

Because if the banks were to run out of collateral they can swap for Bank of England loans, well in the current inclement weather, that would be lethal.

Well, one of the reasons why the board of the Financial Services Authority deemed last weekend that Bradford & Bingley was no longer viable and fit to take deposits - which was the precursor to it being nationalised - was that it had almost run out of good quality assets that it could swap for loans from the Bank of England.

It wasn't the only reason why the City watchdog decided that B&B had reached the end of the line.

But B&B's inability to get much more out of the Bank was like the valve being closed on an intravenous drip.