How will the Chancellor repay debt?

The Chancellor has said that he needs the flexibility in the looming recession to spend and borrow more than would be possible if he adhered to the fiscal rules.

These are the strictures on how much the Government can borrow that were introduced in 1997 by Alistair Darling's predecessor as Chancellor, Gordon Brown.

The positive gloss Mr Darling put on this admission that those rules would be breached is that - with recession looming - only spending by government can compensate for a slump in spending and investment by businesses and households.

And more government spending would mean more borrowing and an increase in the national debt. 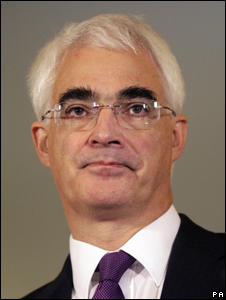 But Mr Darling also conceded in an interview with me - to coincide with his Mais lecture on "maintaining stability in a global economy" - that there's a negative side to the inevitability that the ratio of the national debt to our economic output is set to explode through the 40 per cent ceiling.

The current contraction in our economy means companies and households are paying less tax.

Stamp duty receipts have all but evaporated with the collapse in house sales.

And the appalling plight of banks and other financial firms is endangering 25% of all revenue from corporation tax.

So there's less revenue coming into the Exchequer just as it has to find extra money to pay benefits to those losing their jobs.

The criticism of the government therefore from the opposition is that it allowed the national debt to grow far too much in the boom years.

And it is a serious criticism, because when Gordon Brown introduced the fiscal rules all those years ago there no suggestion that they were only to be applied when the going was good.

Nor is this an academic criticism.

If investment institutions controlling billions of dollars aren't to shun sterling and the debt being sold by the Treasury - with the horrid consequence for the Government of a sharp rise in the cost of servicing that debt - the Chancellor has to explain how the fiscal rules would be changed to remain credible and how the national debt can be reduced to some kind of tolerable level after it rises significantly.

So what slightly surprised me when I interviewed Mr Darling is that he wouldn't even confirm that the fiscal rules will be reformed, rather than simply being conveniently ignored for a while.

There can be no doubt that he will have to reform the fiscal rules in a matter of weeks, and come up with a convincing plan to reduce the national debt as and when economic growth resumes - because in this economic age of anxiety, failure to do so would bring the risk of a dangerous run on the pound.