How close to capitulation?

Blimey it must be serious. 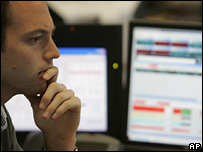 Every European Union leader has signed up to the following statement:

"All the leaders of the European Union make clear that each of them will take whatever measures are necessary to maintain the stability of the financial system - whether through liquidity support through central banks, action to deal with individual banks or enhanced depositor protection schemes.

"While no depositors in our countries' banks have lost any money, we will continue to take the necessary measures to protect both the system and individual depositors. In taking these measures, European leaders acknowledge the need for close coordination and cooperation."

So the mayhem of uncoordinated statements and actions over the past few days by the governments of Germany, Denmark, Sweden, Ireland and Greece was simply an accident.

They're all back on the same hymn-sheet today.

If sustained this would make it the third worst fall in the history of the FTSE 100 index.

Does this mean we're close to that fabled moment in stock markets - the point of capitulation - when investors lose all hope and dump their stock at any price?

According to the theory, there can be no sustained recovery until the markets are in the clutches of utter despair.

Not everyone subscribes to the pseudo-economic psycho-babble.

But it certainly looks hairy out there.

Today was when no one could be under any illusion that the global banking crisis is primarily a North American phenomenon.

There's a mess in Europe too, because European banks were also seduced over the preceding few years into lending too much to cheaply to consumers and businesses.

In the past 24 hours, we've seen bank rescues in Belgium, Luxembourg and Germany, and an attempted rescue of an entire economy, that of Iceland.

We've also had the worrying spectacle of apparent disunity among the governments of Europe, with Germany, Denmark, Sweden and Spain all taking unilateral steps to reassure their savers - which risked destabilising banks in other countries.

And when EU government heads then issued an emergency joint statement promising to collaborate more closely, curiously that served to spook investors even more - presumably because it underlined the fragility of the banking system.

What's also prompted high anxiety among investors and bankers is the mounting evidence that the crisis in financial markets is causing a severe economic slowdown.

And when there's a collision of a financial and economic downturn, well the consequence can be painful - because rising unemployment leads to more loans going bad which further weakens our banks.

So the chancellor's plan to strengthen our banks by injecting taxpayers money in the form of new capital is also an economic recovery plan.