In the past 50 years, there haven't been many - if any - meetings of the world's seven richest developed nations as important as today's. 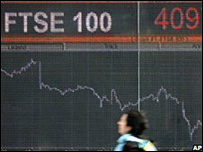 Markets are in meltdown. Investors are dumping almost any asset that can be sold for cash - and never mind the price.

It's a vicious downward spiral.

When the prices of assets fall sharply, that triggers margin calls for other investors, a hideous, insidious form of feedback that triggers another round of asset liquidations.

Which in turn undermines the capital of banks - which forces them to dump yet more assets and call in more loans.

It's a terrifying process, the precursor to a "Minsky Moment" - called such after the economist who described a breakdown of the entire financial system caused by a panicked mass liquidation of assets.

To ward off the Minsky Moment - which would have devastating economic consequences - a circuit breaker has to be found. And only taxpayers can provide that circuit breaker, by - inter alia - underwriting the banking system so that lenders to banks regain confidence that they'll get their money back

The problem is global so the solution has to be global.

National initiatives - such as the UK's £400bn bank rescue plan and the US Treasury's scheme of equivalent size to remove toxins from banks - are useful.

But they can't be a complete cure, because they treat only parts of the ailing body, not the entire sick global corpus.

What would an effective medicine look like? Well it might be a global version of the British Treasury's recently announced £250bn guarantee for lending between banks - which is designed to demonstrate to institutional lenders that they are safe when lending to banks.

This could restore the flow of money between the banks and financial institutions; it could unblock the pipes that underpin our very way of life.

But for reasons that aren't at all clear, the US and French governments have dismissed that kind of initiative.

Maybe there's another cunning plan available to ward off the Minsky Moment.

If the leaders of rich Europe, Japan and North Amierica fail to find such a plan today or over the weekend, the painful consequences could scar a generation.