As a biographer of Gordon Brown and a former FT political editor, I have kept a fairly close eye on our prime minister and on HM Treasury for many years. So, for me, there were a number of jaw dropping moments in his BBC interview yesterday with Andrew Marr. 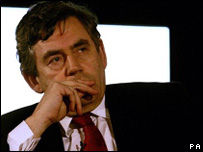 These are they, in no particular order.

1) He said this was a moment in which it was "right" for the government to borrow a good deal more. Well, needs must. The credit crunch and the associated economic slowdown are hammering tax revenues.

In the absence of cuts in public spending, public borrowing next year could be well over 6% of GDP, way above anything we've seen since the early 1990s. The Treasury itself is in something of a funk about the outlook for the public finances.

But the prime minister is positioning his party as the defender of expenditure on public services in these straitened credit-crunched times. He's preparing for a punch-up with the Tories, whom he'll doubtless attack as ruthless plunderers of schools and hospitals. This is where he wants to draw the battle line for the next general election.

But there will be a cost to him. If Brown stood for anything as chancellor it was for prudence and fiscal rectitude. It's goodbye to all that.

2) In the Marr interview, Brown took personal credit for the initiative to clamp down on short-selling, even though the decision to impose restrictions on speculators who profit from falls in share prices was actually taken by the City watchdog, the Financial Services Authority.

It's slightly dangerous for him to undermine the perceived independence of a watchdog he created. Why? Well the FSA didn't cover itself in glory in its regulation of Northern Rock. Is the prime minister now taking responsibility for the FSA's failure to properly assess the risks being run by the Rock? Is he saying that calamity was his fault?

3) Brown said that the current financial crisis was in large part due to the absence of a global regulatory system - and that he had been rebuffed for years by foreign governments in his attempt to construct such a system.

I can only assume that here he's referring to his longstanding attempts to reform the International Monetary Fund so that it could give a louder "early warning" when imbalances are building up in the financial system.

Now there are two things to say about this. First, there were very loud warnings being made about the credit bubble that was being created - by the central bank's bank, the Bank for International Settlements, for example. These were largely ignored in finance ministries, including the Treasury.

Second, there will be wry amusement in Brussels and throughout the eurozone about Brown's claims that he was the champion of more integrated regulation across borders - because for years he and the Treasury battled successfully to prevent tighter Europe-wide regulation of financial services.

Brown was defending the interests of the City. It may well have been the right thing to do. But given the current crisis, the eurozone's less laisser-faire governments will insist that they were right and he was wrong.

4) While we're on about the interests of the City, another part of the Brown brand has been that he would defend our financial services industry more-or-less to the death. Yesterday, with the reputation of big-bonus bankers now on a par with Attila, he put the boot in (although he claimed still to be "pro business" and "pro markets").

That may be good short term politics. But another little bit of what defined him has died.

Also there are still some countries where investment banks, hedge funds and private equity firms aren't perceived as leprosy carriers. If they're on the receiving end of much more opprobrium from the British authorities, there'll be a substantial exodus of them.

Many may say good riddance - unless and until they notice that a big chunk of what has been generating our economic growth has relocated to Switzerland.

5) Brown said that the £100bn of hard-to-refinance mortgage assets that our banks have swapped for Treasury bills, via the Bank of England's Special Liquidity Scheme, is an attempt to "reignite the mortgage market" so that there's both "competition" and "fair prices" for borrowers.

This was a particularly odd claim. If he really believes that's what the scheme was about, then he would have to acknowledge it's been a total flop, since the mortgage market is flatter than a pancake.

But actually, as the Bank of England has made crystal clear, the point of the Special Liquidity Scheme was not to revive the mortgage market. It was to provide liquidity to cash-strapped banks, to prevent any more of them falling over.

If anything, what strikes me most about these remarks is what it may show about his loss of a sure touch when discussing complex but important financial issues.

Anyway, there's more that could be said about the prime minister's re-making of himself (which by the way he and his advisers perceive as a great success). But I'm exhausted trying to fathom the new Brown, so that'll do for now.