For those who believe in free markets, it's a good thing that Lehman has gone bust. 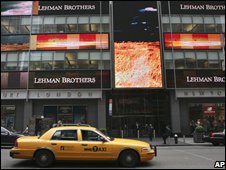 Well a corollary of having the freedom to make hay or fat returns when the sun shines is that banks should suffer for their mistakes.

But ever since the credit crunch set in last year, the US Treasury and the UK government have bailed out banks that ran into trouble

They feared that if Fannie Mae, Freddie Mac, Bear Stearns and Northern Rock had been allowed to collapse, the havoc wreaked on global markets and economies would have seen excessive pain inflicted on too many innocent people.

The problem with these bail outs is that they provided comfort to banks that they could make stupid mistakes and get away with it (well, to an extent).

The US Treasury has well and truly re-established moral hazard - the idea that banks should pay for their sins - by refusing to use taxpayers' money to support Lehman.

And make no mistake, this is a huge insolvency filing, the biggest in US corporate history, with $613bn or £340bn owed to creditors - equivalent to around a quarter of UK economic output.

Big banks can no longer be under any illusion that they can make big, stupid financial bets and expect taxpayers to pick up the bill when the bets go wrong.

Which most taxpayers may feel was a lesson worth teaching - unless they're all impoverished ultimately by collateral damage to other banks and a potentially negative impact on global growth.

Let's hope, for all our sakes, that Hank Paulson's decision to punish this big bank doesn't end up hurting us (and him) disproportionately.