The charge sheet against BAA is a long one. 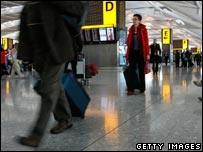 Passengers moan about overcrowding and delays in its terminals.

Airlines complain that the charges levied by the owner of the UK's largest airports are excessive.

For the Competition Commission part of the solution would be for there to be proper competition between airports.

Which is why next week the competiton watchdog will recommend that BAA's near-monopoly of airports in the South East and in lowland Scotland should be smashed.

BAA would keep Heathrow but probably be forced to sell either or both of London's Gatwick and Stansted airports and also Edinburgh or Glasgow airport.

Sir Nigel Rudd, BAA's chairman, discloses in an interview with me (to be broadcast on BBC News tonight as part of my Leading Questions series of interviews with business leaders) that he fully expects such a recommendation from the Commission.

And he says that dismantling BAA in this way would not be a financial disaster for its owners, led by Ferrovial of Spain.

The owners have already had what he describes as "huge expressions of interest" from potential buyers of Gatwick and Stansted, he says.

And he insists that the painful recession afflicting airlines right now hasn't depressed in a serious way what Ferrovial and its partners would receive from a sale.

But just because the Heathrow proprietors could cope with the disposal of these airports would not make their disposal a good thing: Rudd believes that breaking up Heathrow would be pointless.

Because airlines are still queuing around the block to obtain slots at Heathrow, he says.

And he's doubtful that even the very best management and marketing in the world would ever turn Gatwick or Stansted into serious competition for the UK's great transport hub.

That however is an unprovable proposition: Heathrow has never faced a serious commercial challenge to its extraordinary market position, though it's probably about to do so.

Many will dismiss Rudd argument as what a monopolist would say.

As for the future of Heathrow itself, Sir Nigel Rudd is hopeful that by 2020 it will have the third runway it so badly wants.

This lifelong Tory is disappointed that David Cameron has expressed strong reservations about the necessity of a new runway. But Sir Nigel is confident that once elected to office, Mr Cameron would suddenly see the desirability of expanding Heathrow.

As for the suggestion by London's Mayor Boris Johnson that Heathrow could be relocated to a less residential area in the Thames Estuary, Rudd says that's simply not feasible.