I have learned that the Treasury may give a taxpayer guarantee to billions of pounds of bonds known as mortgage-backed securities created by banks out of high quality mortgages, in a radical attempt to revive Britain's rapidly shrinking mortgage market. 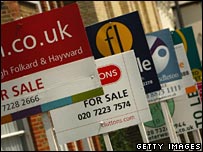 Officials from the Treasury are examining such an ambitious and controversial scheme in response to a dire assessment of the outlook for mortgage finance to be published at 10am today by Sir James Crosby, the deputy chairman of the City watchdog, the Financial Services Authority.

Sir James is forecasting that a chronic shortage of mortgage finance for homebuyers and homeowners which has persisted for months will continue throughout this year, 2009 and 2010.

In April, Sir James was asked by the chancellor, Alistair Darling, to examine what "market-led initiatives" might be necessary to improve the functioning of markets in mortgage-backed securities.

He was commissioned to do this because of the importance of the market for mortgage-backed securities, which grew explosively after 2000 and became a vital source of funding for British mortgage lenders.

Sir James is understood to have concluded that by 2006 finance from the sale of these securities - which are packages of mortgages lent to homebuyers - was equal to two-thirds of all net new mortgage lending in the UK.

By the end of last year, the total stock of UK mortgage-backed securities was a staggering £257bn - equivalent to around a fifth of the value of the British economy - out of total residential mortgages of £1200bn.

But almost exactly a year ago, with the onset of the phenomenon now known as the credit crunch, demand for these bonds completely dried up.

It has since become almost impossible for any bank to issue mortgage-backed securities. So banks simply don't have the cash to meet even the current reduced demand for mortgages from homeowners who need to refinance their debts and from prospective homebuyers.

As I wrote in May leading banks are expecting the net increase in mortgage lending to fall to £60bn in 2008, from £110bn last year and a similar amount in 2006. That's a drop of 45% - a shrinkage that reflects a collapse in mortgage approvals for house purchase.

Nor is the plunge of the mortgage-backed securities market the only funding difficulty being experienced by banks. They are struggling both to raise other forms of wholesale funding and to extend the maturity of their existing debts

Also the squeeze on the money they have available for new mortgages is exacerbated - according to Sir James - by their obligation to repay around half of their existing mortgage-backed borrowings over the coming three years.

And adding to the banks' woes is that as they reduce the supply of mortgages and increase the cost of homeloans, there is likely to be a rise in the number of mortgage holders who can't pay their debts. A consequential increase in defaults would further deplete their capital resources and their ability to lend.

So, broadly, mortgage finance is now only available to those with utterly reliable earnings and deposits equivalent to at least 25% of the value of what they want to borrow.

Sir James warns that the availability of finance to all other consumers - including most first-time buyers - is much reduced and likely to remain so.

As for what little lending there is, that's now dominated by the UK's biggest five or six banks, with small banks and building societies making almost no new loans. Sir James expects many mortgage intermediaries to disappear.

He also expects the shortage of mortgage finance to exacerbate the fall in house prices (doh!) and the weakness of consumer spending (double doh!).

What's to be done?

He believes it may make sense for the government to attempt to re-open the market for mortgage-backed securities, to prevent the banks becoming so strapped for cash that the housing market would go from decline to meltdown.

Sir James says there are two leading contenders for government intervention in this market.

One would be something along the lines of an idea put forward by the Council of Mortgage Lenders, with the Bank of England becoming - in effect - the market-maker of last resort for mortgage-backed bonds.

On this model, which would be seen as an extension of the £100bn so-called Special Liquidity Scheme the Bank announced in the spring, the Bank would agree to lend to almost any financial or investment institution against the security of mortgage-backed bonds bought by the relevant institution.

The Bank would be guaranteeing that if the market for such bonds were shut, it would make sure that the bonds did not become totally illiquid.

However the much more radical suggestion mooted by Sir James - and under active review by the Treasury - would be for the government to guarantee, on commercial terms, billions of pounds of better quality tranches of new mortgage-backed securities.

Or to put it another way, the taxpayer would be providing a promise that it would pick up the tab in the event that the value of of those securities was impaired by a huge rise in repayment difficulties or defaults by mortgage borrowers.

Which would be pretty controversial, as it would be seen as taxpayers underwriting a huge slug of the mortgage market.

Some would argue that our entire mortgage industry would be nationalised, although that would probably be overstating it.

To be clear, Sir James may yet - when he issues his final report in September or October - recommend that the government should not intervene, on the basis that such intervention may create more difficulties than it would solve.

But the tenor of his report suggests that there would be significant risks to the health of the economy from doing nothing.

And although the chancellor, Alistair Darling, has no intention of trying to prevent house prices from falling - in that he acknowledges that it would be mad and futile to attempt to rig the housing market in a fundamental way - Darling is deeply troubled by the risk that the chronic shortage of mortgage finance could lead house prices to fall much further and faster than would be warranted on the basis of notional economic fundamentals.

What Darling would like to prevent, if he possibly can, would be house prices overshooting on the way down, just as they overshot on the way up, and thereby wreaking massive damage to the economy.

With the full force of the tide against him, he'll find that a challenge.