So private equity has made a successful takeover bid for the whole of London. 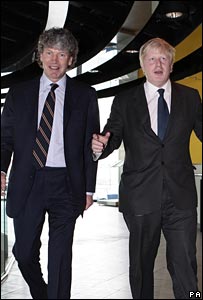 Well, with the price of many public companies relatively high and debt-finance still too tight to mention, we shouldn't be surprised that one of the star operational managers of the buyout sector has opted to run our capital as Boris Johnson's de facto chief executive.

It's the best mega deal around - and the only mega deal.

He's worth a few tens of million pounds and is what George Soros would call "filthy rich".

And he was one of the lightning rods for that onslaught of criticism of private equity a year ago.

As the then chief executive of the AA, he and his backers - the private-equity firms Permira and CVC - were lambasted week after week for their alleged ruthless treatment of AA employees.

In fact, to some extent he was the victim of propaganda generated in a territorial dispute by a couple of unions, struggling for negotiating rights at the AA.

But at a time of growing unease about the widening gap between the super-rich and the rest, some of the mud stuck (fairly or not).

That the Tories plainly don't care about his historic image problem is a sign that what they want is the best man for the job (in their view) and aren't as obsessed with image and public relations as their critics would allege.

So what would Parker actually do for London?

Well he is good at cutting costs - and at delivering services in a more efficient way.

If the priority is for Londoners to receive more for all that council tax, he may turn out to be a smart choice.

More significantly, he is probably the radical model for what the Conservatives would do on a much bigger scale with public services if they take control of national Government - and is therefore worth keeping close tabs on.

As for the battered private-equity industry, its leaders will be cheering.

One of them told me on Wednesday that they are terrified they will again become national figures of loathing and contempt in a serious economic downturn - having made a fortune in the good times but having loaded up a number of substantial companies with huge debts that could sink those companies.

But they can rest easy that any future Conservative government is very unlikely to put the boot into them.