This is stock market capitalism at its most raw. 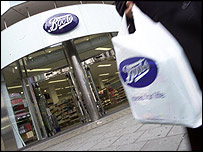 It means they now own 25 per cent of the famous healthcare retailer and wholesaler.

What they've done has two implications.

They will now have to raise their offer to all Alliance Boots shareholders to what they paid last night, which was £11.39.

That means their takeover offer will value Alliance Boots at £11.1bn, or almost 14 per cent more than they were originally prepared to pay for the company.

And their share raid has probably defeated the rival group of Terra Firma and the charity Wellcome Trust, which also wants to buy Alliance Boots.

It's history: Boots, one of the UK's oldest retailers, is set to be owned by the American founder of the modern private-equity industry, KKR.

We thought it was all over. It is now.

Terra Firma has abandoned its attempt to buy Alliance Boots, which means that beyond any doubt KKR is the new owner.

All this proves to me is that there are huge amounts of cash wallowing around in the system and that nobody really has much of a clue as what to do with it.

you mentioned that under takeover rules that KKR cannot buy shares above its initial bid for £11.15 viz 11.26 minus break fee because the Wellcome Trust has put in a conditional bid. How then can KKR pay out £11.39 a share while its under takeover rules?

If we dont like the fact that KKR are buying Boots with a debt mountain that will be ladened onto Boots itself, we as consumers are ultimately the only ones who can defeat it.
If KKR succeeds, we can decide to boycott Boots. Perhaps then, and only then will the UK have any defence of any of its industry against US corporate raiders who will end up mortgaging off the UK.

I am afraid as inflation and interest rates are rocketing and consequently stock market is looking nervous (i.e. no public money to invest further)- we may see further surge of private equity firms trying to get hold as many as big but venerable companies.

perhaps for job market it is better than heading towards another recession.

I don't think boycotting Boots will be an option of prtest, as this takeover will be C&A all over again. Sell the property portfolio, sell the distribution business and bye bye a major UK brand.

In response to Ben's suggestion of a boycott:

Surely if a boycott is necessary to make Boots fail, leaving KKR to do what they do best should work out? After all, it is in their best interests to raise the value of Boots, and if they can succeed in improving the company, it should be taken as a sign that the private equity model works.

In short, I feel that it is flawed reasoning to suugest that we need to take drastic action to force them to fail - all this proves is that they cannot operate when people meddle with their plans. Lack of accountability is one of the key priciples which private equity is founded upon, and is the key to its success.

What about Boots pensioners.......the staff who made Boots great???

Only 4 people so far have posted their comments, a sad state of affairs really. And even sadder that UK companies are being sold out - does not the British public care any longer for their Britishness? And the respect level companies like Jaguar, Range Rover and other defined UK companies once held? All gone with the wind to the highest non British bidder. It's wrong that this esteemed UK firm Boots has been sold out - but then who cares? Oh wait - maybe someone will care when the UK is owned and operated by a consortium of other countries.

Boots will remain a "British" company, the shareholders themselves will just change - KKR and the funds they control will probably contain a significant amount of British capital providers. This isn't a corporate takeover, the HQ won't be closed down etc. It may be that in 5-7 years time if KKR and Pessina plans come to frutition that Boots will be refloated back on the stockmarket as a much bigger concern, perhaps a global pharmcy and wholesale drugs distributor and UK retail company. Or it could collaspe under the weight of its debts. Whatever happens the company will turn from a stable solid retailer/wholesaler to a higher risk but probably higher growth company. Fingers crossed they are successful for employees and staff alike.

In response to Peter Galbavy i too agree with this due to the current consumer market in general moving towards online spending, this would obviously put Boots in a negative position as a high strett brand. It will be interesting to see how KKR react to this.

one problem KRR may have in the future is that competition may become fierce and they may be pushed out of the market!

Perhaps we should be considering whether or not KKR should be allowed to take over Boots as they as likely to want to expand, which is likely to mean buyig out other companies, which may be an infringement upon Monopolistic laws

As a Boots pharmacist I would ask you to consider the 100000 or so staff before you stage a boycott and get us all made redundant! Regarding the online shopping threat, this is probably less of a problem for Boots than some other retailers as the expansion plans mainly revolve around healthcare and prescription business. As far as I'm concerned the Boots brand is going nowhere and is much more established and safe than the (non-British) C&A brand.

As a Boots employee, all we want is for some stability and good staffing levels so that we can give our customers 100% good service. Hopefully, focus on community pharmacy and less on shareholders pockets will make this a reality. I know that this is a very niaive response, but I think in this world most of us are just trying to do the best we can on a daily basis.

I'd like to second the sentiments of Calum. My sister works for an "academy" Boots store and I myself am a Boots ex-employee. The personnel and prices will be the first to be sacrified; there's always a human element to think about before we go charging in boycotting whatever is fashionable to be "anti" at the time. (Nestle, McDonalds etc...)

The public can easily stop the activities of private equity and these massively leveraged buyouts.
How?
The public should simply boycott the purchase of the goods and services that the underlying companies produce.
Would that hurt company workers? Yes, but it would probably be less harmful over the long term than if we allow PE to continue to asset strip and leverage their way to riches.