Re-homing nature: A step too far?

Sir Richard Branson's plan to introduce lemurs to islands he owns in the Caribbean, which I reported on Saturday, has thrown into new light a real dilemma facing conservation scientists as they struggle to contain and reverse the loss of species and ecosystems across the world. 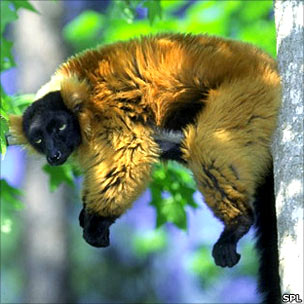 The red-ruffed lemur is among the most threatened

Lemurs are Madagascar's most iconic animals, very old in evolutionary terms and seriously enchanting to the human eye.

And they're seriously threatened - some species more than others - principally by deforestation.

As always, the first requirement for effective conservation is the effective rule of law.

And many reports indicate that since the overthrow of President Marc Ravalomanana two years ago, the country's civil turmoil has resurrected the climate of opportunistic environmental plundering that the deposed leader had done much to curb.

With some lemurs now facing extinction in the wild, what would be more natural than to think of taking some of them somewhere else - in Sir Richard's words, "giving them a new island" - where they can live in peace and tranquility?

At first sight, it's a solution that could be implented on a wide scale. Indonesia alone has about 7,000 uninhabited islands - why not set up a scheme that distributes imperilled plants and animals from southeast Asia between them, for example?

If something seems simple and straightforward, there's usually a reason why it isn't being done already.

And in this case, there are several.

There's a saying "marry in haste, repent at leisure"... and it appears to be especially true when the marriage is a forced one between components of different ecosystems.

Well-known examples would include the introduction of the rabbit and the cane toad in Australia. But we can add birds and plants to Hawaii, possums to New Zealand, lampreys to the Great Lakes of North America, and rats on countless islands.

So when conservation scientists sat down a couple of decades ago to write a set of guidelines on how and when introductions should be used as a tool for conserving species, they were naturally cautious:

"The damage done by harmful introductions to natural systems far outweighs the benefit derived from them.

"The introduction and establishment of alien species in areas where they did not formerly occur, as an accidental or intended result of human activities, has often been directly harmful to the native plants and animals of many parts of the world and to the welfare of mankind."

Introductions, it continues, have resulted in a few species coming to dominate a large number of ecosystems as they either eat, infect or out-compete the traditional inhabitants.

"Islands, in the broad sense, including isolated biological systems such as lakes or isolated mountains, are especially vulnerable to introductions because their often simple ecosystems offer refuge for species that are not aggressive competitors."

The guidelines - developed by the International Union for the Conservation of Nature (IUCN) - don't say "never do it". But they do say "tread carefully" - because obviously it would be hugely ironic if introductions with a conservation motive ended up doing damage. 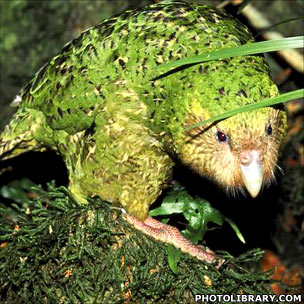 Kakapos have been given to new homes - but not far away

So far, species introductions have mostly been used over small distances, in situations where the original habitat has become impossible.

Several New Zealand birds, for example, such as the flightless kakapo, have been successfully introduced to islands off the coast after human expansion and newly-introduced pests meant they simply could not survive in their native lands.

A particularly intriguing situation concerns the Kihansi spray toad, one of the world's smallest amphibians.

It lived in a single waterfall. Now that habitat has gone - construction of a hydro-electric dam first dried up and then polluted the water supply, and introduced the lethal disease chytridiomycosis.

Discussions are ongoing as to whether captive populations should be introduced to a similar waterfall, and if so, where; but certainly its native home is not an option, and perhaps never will be.

But taking a species from one continent and "giving it another island" on the other side of the world as a place where it can live more or less in perpetuity - that is, as far as I can ascertain, unprecedented.

The islands are Moskito (also written Mosquito) and Necker, in the British Virgin Islands (BVI), which Sir Richard owns.

He tells me that although they did not specifically evaluate the potential impact of lemurs...

"...in several places in the assessment we cautioned against non-native introductions."

"You should realise that there are no lemur-sized mammals native to Moskito or Necker because the islands cannot support such large animals. Therefore, it is almost certain that lemurs would not survive long on the island without significant care and feeding.

"Further, there are toxic plants native to the islands that could possibly harm lemurs, and at least two native raptors are large enough to prey on young lemurs. Also, the lemurs may negatively impact native birds or some of the rare reptiles and that could become a problem."

At least a dozen species of bird nest on the island, he said; and some lemur species are partial to eggs.

Dr Petrovic was at pains to point out that Sir Richard has been ecologically an excellent custodian of his islands, and has gone to great lengths (and expense) to conserve and improve the environment.

Sir Richard also told me that if problems were to arise - if lemurs started eating the dwarf gecko, for example - he would take measures to deal with that.

However, even if these local impacts can be dealt with, then if Clive Petrovic is right and the island can't support lemurs without constant human intervention, one has to ask whether this project really meets the criterion of giving the animals another island.

It would, however, meet another aim of Sir Richard's - to give captive lemurs a better home than the ones they currently have in cages in zoos.

We're not talking about all zoos here; but some he's targeting do appear to be keeping animals in less than optimum conditions.

But that's an animal welfare issue, not a conservation issue.

The potential biological impact is only one reason why conservation scientists tend to regard species introductions as a last-ditch measure.

Iconic animals such as lemurs are seen as ways of leveraging money and political pressure that can be used to conserve the whole native ecosystem.

Some of the activists who began campaigning to "Save the Whale" all those years ago were actually interested in the entirety of ocean life, but used whales as a flag around which governments and ordinary folk could rally.

So it is with lemurs. Use their iconic value to save the Madagascan forests, and you also preserve the entire ecosystem, not just its cuddliest component; that's the argument.

So there is concern about the potential impact of sending a message - however unwittingly - that could be taken as meaning "the animals are OK because now they have a second home".

Some also find it a difficult ethical issue.

Who are we, they argue, to distribute species around the planet according to a set of criteria that we develop ourselves and which may well contain a deal of anthropocentric reasoning?

The counter-argument is that we've been redistributing species as long as we've been travellers, and have wrought more profoundly damaging change - usually by accident - than anything we're likely to do through the unintended impact of conservation programmes.

Yet more opposition comes from the idea that there's obviously a limit to what species introductions can achieve.

Could we, for example, take the endangered snow leopard and find it a couple of uninhabited islands, perhaps in the Canadian Arctic? To where should the northern black rhino be transplanted?

As summer sea ice in the Arctic becomes a scarce commodity, are there any uninhabited islands around the Antarctic that could take on some polar bears?

And what about the oceans - how does the notion of second homes work there?

So - the argument goes - let's just set this limited and problematic idea to one side and concentrate on the fundamental aim of conserving places where the animals actually live now, and to which they're optimally adapted through millennia of evolution.

There will doubtless be readers who take the view: "yes but we've still got to do something", and would applaud Sir Richard unreservedly for offering sanctuary to some of these undeniably charming and fascinating creatures - and perhaps wish that other people would similarly get off their richly-caveated backsides and actually do something.

And I'm sure everyone concerned about nature would wish him well with the venture.

However, there are concerns out there. An e-mail I received from another ecologist who has worked with lemurs asked simply:

And while that over-dramatises the situation, the wider issues demonstrate that saving nature is about far more than giving it a new home.