In a week when the introduction of species to islands has been under discussion for other reasons, news comes from Mauritius of a new inhabitant that is restoring a vital piece of long-extinct ecology.

And it centres on a tortoise. 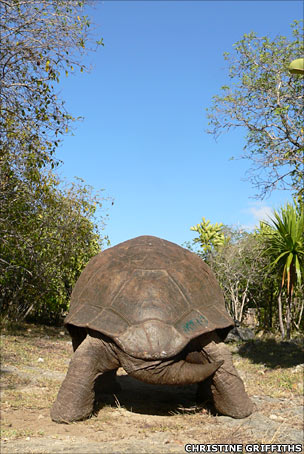 Several hundred years ago, settlers wiped out the big wildlife from the Ile aux Aigrettes, a small island off the Mauritian coast that's now a nature reserve.

Vanished creatures include a giant tortoise of the Cylindraspis genus and Leiolopisma mauritiana, the largest skink in the world while it still existed.

What might not been have anticipated was the impact on one of the island's most important trees, a species of ebony (Diospyros egrettarum).

The giant tortoises, and maybe the skinks too, would eat fruit from the ebony trees as it lay on the ground.

The animals would then waddle away; so when the fruit emerged some days later at their nether end, it was now some distance away from its parent tree.

So just as the forest was essential for the tortoise's survival, the reverse is also true.

And without the giant seed-dispersers, egrettarum's capacity to spread itself around Ile aux Aigrettes has become so compromised that the species is now listed as Critically Endangered.

It's not the only issue threatening them - chopping valuable ebony trees down hasn't helped, and neither has the introduction of plants from outside the island - but without their carapaced companions, the ebony fruit and the seeds they contain can only fall under existing trees, with no chance of spreading further afield.

A group of scientists headed by Christine Griffiths from the UK's University of Bristol decided to attempt something a bit radical; stocking the island with another giant tortoise.

And in the journal Current Biology this week, they relate what happened.

Essentially, it's a good news story. The tortoises - Aldabrachelys gigantea, one of the largest species in the world - were imported from fairly close by, the Aldabra atoll in the Seychelles, and appear to live happily in their new home.

They have been eating the ebony fruits and dispersing them over large distances, which should help the trees' recover something of their former range.

And the researchers discovered another important role that the tortoises play. Passage through their digestive system strips some of the fruit away, meaning that the seeds within it germinate much faster after they hit the ground - perhaps meaning that more seeds germinate in total.

Tortoises are to the ebony trees what civets are to coffee-lovers - at least in parts of Southeast Asia... 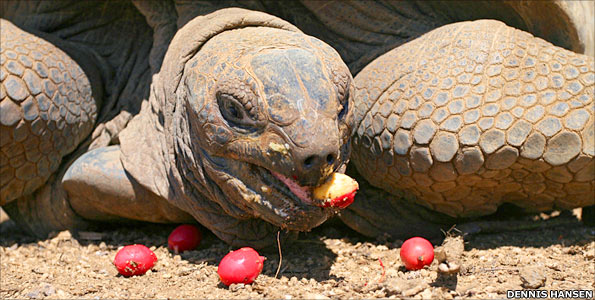 The tortoises have developed a taste for the ebony fruit

As we've discussed here (and thanks for all your incisive comments on that thread), introducing new species to islands isn't something to be done lightly.

But as the researchers point out, here they were using a species very similar to the one that disappeared; plus the tortoises are so big and so slow-moving that if anything does seem to be going wrong, they can be plucked out of the ecosystem again.

The team also cautions that longer-term observation is needed because there are also introduced plants on Ile aux Aigrettes; and what impacts the tortoises may have on them is an unknown, as presumably the twain will not previously have met.

At some point down the road, I guess, an ethical decision will have to be made.

Do the tortoises stay, or go? Deciding the former implies a judgement that overall, the ecological health of the island is better with a large, lumbering, introduced new inhabitant than without.

In the Seychelles, the quarter-tonne beasts have quite an impact.

They make burrows; and some of the land is now covered in what's termed "tortoise turf", where more than 20 species of grasses and other plants grow together - some having evolved to produce seed low down their stems, better placed to avoid the animals' chomping jaws.

And - an important issue for an island introduction - they can swim.

But take them away, and perhaps the ebony's fate will be sealed.

So do they stay or do they go?

Hope you enjoy chewing this one over!