Environmental group Greenpeace is claiming something of a victory with the news that the UK's biggest supplier of canned tuna, Princes, is going to source its fish from more sustainable supplies than previously. 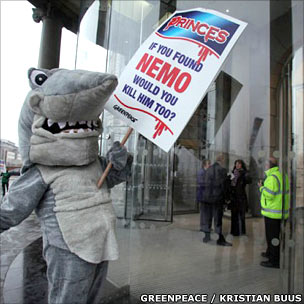 A certain proportion of its tuna will come from pole-and-line fishing, while the remainder, from 2014, will come from fleets that pledge not to use fish aggregating devices (FADs).

It's reportedly been joined by Asda, one of the country's principal supermarket chains, although at the time of writing the company hasn't got back to me to confirm.

Greenpeace has been leading a campaign aiming to "name and shame" suppliers who don't put particularly sustainable standards on their tuna, and to stimulate consumer pressure to demand that shops up their game on the issue.

Part of the camapign has been a "league table" of retailers - and at the most recent iteration, Princes came in eighth and last place, condemned for a number of apparent failings, including:

So the new announcement clearly marks a change. A company spokesman described it to me as "the next phase in Princes' tuna sustainability plan" - although to the environmental group's eye, it's a sharper change of direction than that.

The announcement means that from now on, more than half of the canned tuna bought in the UK (which is the world's second-biggest market) will be supplied by companies signed up to a sustainable sourcing policy.

Given the huge amount of publicity given to bluefin tuna over the last few years, it's important to point out that what we're talking about here isn't bluefin, whose delicate flesh is far too valuable to be imprisoned in tins.

And indeed, the primary ecological reasons for concern are rather different.

The biggest issue with the bluefin is simply that the species have been fished to the point of exaustion. 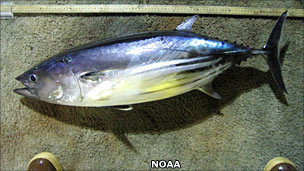 The skipjack is one of the smallest tuna species fished commercially

The main ingredient of canned tuna is the skipjack (Katsuwonus pelamis), a small, fast-swimming, fecund, gregarious species that is generally thought not to be significantly depleted, despite the huge fishing effort deployed against it.

The problem is that skipjack are often found in close proximity to other tunas such as yellowfin and bigeye, which are in some trouble - the bigeye (Thunnus obesus) being listed as Vulnerable on the IUCN Red List of Threatened Species.

Particularly when FADs are used, young bigeye and yellowfin are caught in the same nets that snare skipjack.

FADs also lure sharks, many species of which are on the Red List - and these too are killed in the purse seine nets, whose modus operandi is to close like a purse around an entire shoal of fish.

What to do? Well, it's a complex routine.

The "gold standard" is to go fishing with a pole and line - one of the more traditional fishing methods, and perhaps the most selective of all.

It also has the benefit of providing employment in developing countries - in the Pacific islands, for example, where much of Europe's tuna is caught - rather than allowing internationally owned and operated purse seine boats to reap the reward.

But there are also constraints that make it doubtful whether pole and line fishing can supply all the tuna that Europe needs, let alone other parts of the world.

We're largely talking about small boats travelling not too far from shore - which limits the area for fishing.

We're also talking about a fishing method that needs live bait to attract the carnivorous skipjack.

A study published just this month suggests that if the Pacific Islands were to provide all the tuna they currently do, but only through pole and line fishing, catching all the bait fish required would seriously deplete stocks of those species (such as sprat and anchovy). 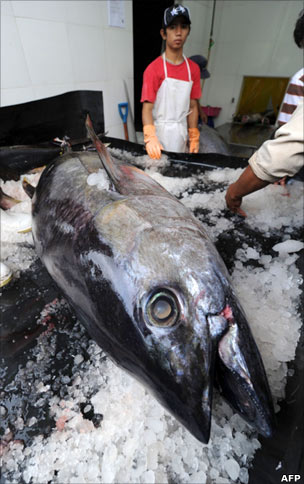 So although some suppliers are demanding fish caught by pole and line exclusively, it's not certain that this is a feasible answer across the board.

Hence the decision of Princes to settle in part for fisheries that don't use FADs.

These devices depend on a quirk of fish behaviour.

Stick something big in the middle of open sea - a buoy, a big log, whatever - and many species will congregate around it.

Why this should be so isn't entirely clear.

One theory is that small species see it as a shelter from predation - meaning that bigger carnivorous ones have come to see floating objects as floating restaurants.

Whatever the reason, you can now buy sophisticated buoys equipped with sonar and GPS.

They can be despatched into the oceans, able to send skippers a continuous stream of data indicating where they are and roughly what volume of fish are gathered around - ideal for snatching up in a purse seine net when the time is right.

FADs make highly efficient tools for fishermen - but they are highly inefficient at discriminating between different species.

The thought is that in the absence of FADs, species will separate, enabling skippers to scoop out skipjack without touching the bigeye.

Later this year we should see the start of trials testing prototype FADs designed to attract single species - more of that in a few months, I hope.

In the meantime, what's the global significance of these moves within the UK? After all, its canned tuna market may be an important one, but it's still only a single country.

Well, it's partly that the "dolphin-friendly tuna" campaign of the 1980s was one of the most effective environmental campaigns in living memory, bringing changes to the industry globally from its roots in the US - whatever caveats are raised about its ecological sophistication.

In a sense, the current tuna campaign is a logical extension; and making it global would be a logical next step.

It's partly, also, that companies in the industry are generally international. Asda is owned by Walmart, for example, Princes by Mitsubishi; practices seen as good in one branch of a multinational are liable to bleed through to the next.

Thirdly, in order to supply the more selective shopper, suppliers will have to increase the scrutiny they put on their own work.

Fishermen will have to label catches more carefully, and processors will have to maintain traceable supply chains.

Is sustainable tuna in the can? Not yet... but it's filling up.