Whaling: Beginning of the end?

Is this the beginning of the end for Japanese whaling in the Antarctic? 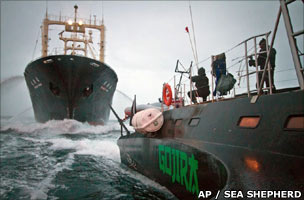 Clashes have been dramatic - enough to cause a U-turn?

That is the biggest question arising from Wednesday's announcement in Tokyo that this season's whaling programme was being suspended.

The Fisheries Agency (FAJ) hasn't formally declared the season over, but it appears likely that the fleet will soon be on its way out of the Southern Ocean and back to harbour.

FAJ official Tatsuya Nakaoku blamed the suspension on harrassment by the Sea Shepherd Conservation Society, which has made life progressively more difficult for the whaling fleet each year by sending faster and better-equipped boats.

This season, it has regularly managed to park across the back of the Nisshin Maru factory ship, making it impossible to winch whales on board.

Mr Nakaoku said it was a question of Sea Shepherd boats endangering safety.

So has Sea Shepherd won? It has pursued its campaign not only in face of physical opposition from the whaling fleet, but also objections from some anti-whaling observers who believe the annual confrontations handed the FAJ an opportunity to garner support by painting an image of anti-whaling activists as anti-Japanese and akin to terrorists.

The campaigns have certainly reduced the number of whales caught. The official target this season was 850 minke whales and 50 fin whales, although the fleet left port later than usual and was apparently aiming for a far smaller quota - perhaps as low as 200.

No official pronouncement has been made on the actual catch - Sea Shepherd estimates it at 30.

But the ocean skirmishes are just one part of a much bigger picture, with a number of factors combining to squeeze the Japanese whaling programme in a financial and political vice. 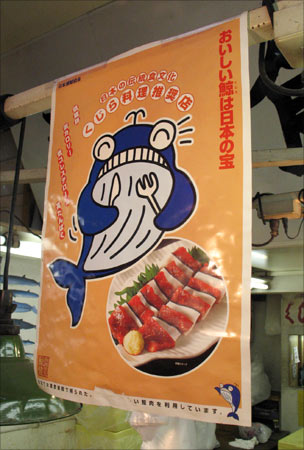 Sales of whalemeat have fallen, despite promotion

The national budgetary situation is dire.

The Kyodo Senpaku company, which actually does the whaling on behalf of the Institute of Cetacean Research (ICR), is itself said to be in major financial difficulties.

The greater part of the funding for the whaling operation comes from selling meat.

With sales falling, and a constrained government not minded to raise its subsidy in compensation, a smaller fleet salied than in previous years - which made it more vulnerable to Sea Shepherd's attention.

(In fact, one of the ironies of the current situation is that the plucky anti-establishment activist group is probably much better funded than its state-backed foe - especially given its recent receipt of a million euros from the Dutch National Lottery.)

Sources from within the industry told Greenpeace in December that a smaller quota would be targeted this year, purely for financial reasons.

Meanwhile, the Australian legal case against Japanese whaling is due to come to the International Court of Justice this year.

It'll take several years to conclude and there's no guarantee Australia will win - even so, there may be some in the Japanese government who see the reputational damage as being just too severe.

Another looming constraint is that from next season, ships carrying heavy fuel oil will be banned from Antarctic waters under the International Maritime Organization's new anti-pollution code.

Switching the Nisshin Maru to diesel would be technically feasible - but would anyone foot the bill?

An alternative would be to invest in a new factory ship that would both meet the new pollution standard and be fast enough to escape Sea Shepherd's attention.

But again - who's going to pay?

On the other hand - without such an upgrade, will the whaling fleet ever be effective again?

Reading the political runes is never easy on this issue, but there's no doubting that Mr Nakaoku's statement marks a major change of tone. 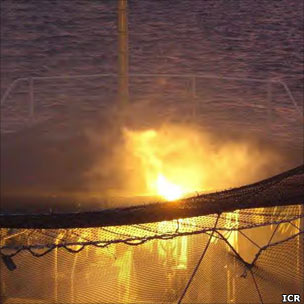 The ICR says activists have attacked with flares

Previously, the Fisheries Agency and the ICR have been adamant that Sea Shepherd would not win on the seas. Fire has been fought with fire, even to the extent of collisions that really did endanger lives.

Yet now the official line is that Sea Shepherd has made whaling impossible though compromising safety.

It is a remarkable turnaround - and it's matched by the apology that emerged late last year from the FAJ [video link], after it acknowledged that five of its officials had taken "free gifts" of whalemeat in substantial quantities.

Until that point, the official line had been to condemn Greenpeace, whose activists Junichi Sato and Toru Suzuki exposed the issue and were consequently put through criminal prosecution under threat of 10 years in prison (they eventually received suspended sentences).

So what it all means is, as yet, unclear.

But it looks increasingly the case that if the Japanese fleet is to go Antarctic whaling next season, it'll require substantial investment.

Negotiators at the heart of the "peace process" that fell apart at last year's International Whaling Commission (IWC) meeting believed Japan was looking for a way out of the Southern Ocean that saved face.

Admitting to defeat by Sea Shepherd doesn't feel like a face-saving solution.

There's due to be a review after the first six years of operation [pdf link] - which is after the end of the current season.

Might the review conclude that there's no need to continue the research?

Whatever the reality of such speculation - and speculation it is at this stage - it does at least appear possible that the current Antarctic hunting season will be the last.

On the other hand, the crisis might spur the whaling lobby in the Diet to action, and persuade the government that finding the necessary investment would be in the national interest. Maybe Japanese consumers will find a new taste for whalemeat, and the industry's economics will turn around.

Alternatively, the "national interest" card might be deployed in favour of ending the Antarctic operation and spending resources instead on increasing whaling close to shore.

Either way, the fleet's turn away from the Antarctic hunting grounds feels like a significant move in what has been a long-running war of attrition.