All eyes on France, as tuna wars loom

Paris and Brussels are presently seeing skirmishes over the fate of what's become the oceans' most iconic creature - the Atlantic bluefin tuna.

This week and next, the French capital hosts the annual meeting of the International Commission for the Conservation of Atlantic Tunas (Iccat) - the organisation charged with ensuring this species and many others are fished sustainably, but which has in conservationists' eyes so badly mismanaged its task over the years as to garner the alternative appellation of the International Conspiracy to Catch All Tunas. 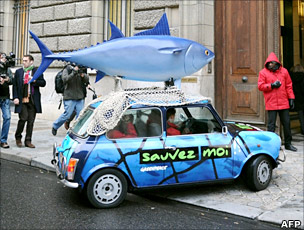 Earlier this year, Iccat's scientific advisers said continuing at this year's catch level of 13,500 tonnes was feasible but only carried about a 60% chance of rebuilding stocks by 2022.

You can call this a 40% chance of failure, if you want.

The European Commissioner for fisheries, Maria Damanaki, has suggested going for 6,000 tonnes a year.

But French agriculture and fisheries minister Bruno Le Maire said France is holding out for the full 13,500, which he described as "recommended by scientists".

He also said French fishermen were "the most controlled, the most responsible and the most respectable" in the Mediterranean.

This was not endorsed by a report on a new Iccat scheme to monitor catches, which emerged a couple of months ago, and found that as things stand, it's basically impossible to determine the true size of the annual catch.

Other EU countries, meanwhile, would prefer a catch of zero, at least for a few years, while stocks rebuild.

At the time of writing, this EU divide is being addressed in Brussels, as national representatives try to agree a common position.

Word is that the "pro-fishing" group has been meeting in one room, and "pro-fish" countries in another not a scenario that suggests a meeting of minds is imminent.

A couple of other factors need to be thrown into the mix here.

One is the position of the US, which has in recent years pushed a zero quota.

But following the results of the mid-term elections, the Gulf of Mexico oil leak (which may have badly affected bluefin spawning there) and the stalling of climate negotiations, the Obama administration is not in as firm a position as it might wish to push any environmental agenda aggressively. 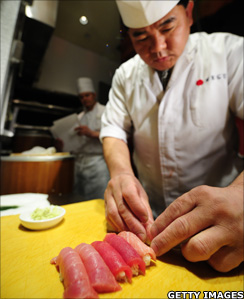 Nevertheless, Jane Lubchenco, head of the National Oceanic and Atmospheric Administration (Noaa), is currently in Europe to talk with other delegations about tuna.

The other big player is Japan, where 80% of bluefin is eaten.

Its officials have long warned about mis-management of the Mediterrannean stock.

And earlier this year, the Mitsubishi group of companies, which controls most of the bluefin trade in Japan, issued a statement indicating it supported strong measures to preserve the fishery.

Reportedly, it has enough bluefin in its freezers to survive a year or two without new meat arriving.

And its statement - hard to find on its website, but nestling in my in-box - is pretty strong:

"[We acknowledge] that the BFT stocks in the Mediterranean are over-fished...we support and urge that, as a minimum, scientific recommendations are strictly followed in the management of runa populations...

"We endorse calls for the establishment of a BFT spawning sanctuary around the Balearic Islands and an immediate ban on BFT fishing around the Islands... [we call] on the Japan Fisheries Agency to not back down from the leadership role that the global community now expects it to fulfil..."

If Ms Damanaki's vision turned to reality, this might be the outcome: 6,000 tonnes per year for artisanal fishers, and nothing for the big purse seine boats whose modus operandi is to scoop up huge agglomerations of bluefin as they come together for spawning.

France only has 17 purse seine boats, operating for about one month in 12. Yet the political force they and their counterparts in other countries wield is still significant.

Last month, at the UN biodiversity summit, the EU proclaimed itself a champion of nature and vowed to take the economic value of biodiversity and ecosystems into account when taking political decisions.

This year's Iccat meeting, some are arguing, is the first real test of this commitment.