A violent snapshot of frog destruction 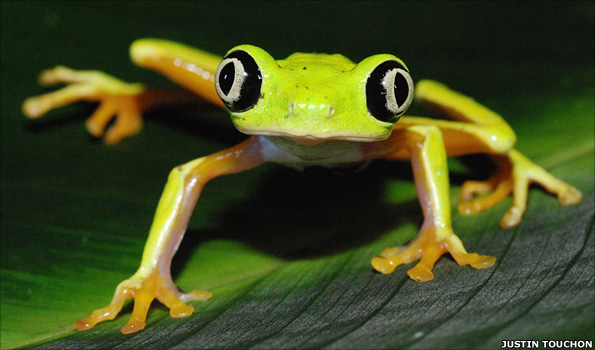 The fungal disease chytridiomycosis has sometimes been compared to a forest fire, sweeping through the world's amphibians and consuming them in its remorseless flame.

It's not a perfect analogy, not least because many species survive the passing conflagration; but it's not bad.

Just as you can see a forest fire coming (particularly now that "seeing" involves the use of hi-tech gadgets such as satellites), in principle you can see chytrid coming too.

Heading southwards through Central America, it's extending the boundary of its range by about 30km per year - apparently unaffected by what kind of terrain it's passing through.

Karen Lips, one of the world's foremost authorities on the disease, realised some years ago that in principle you could pick a site in Central America that was in the path of the blaze, do an amphibian census, and then wait for chytrid to arrive.

Unusually, you'd get a before-and-after snapshot of a real-life, local and unpreventable extinction event.

So it happened that about a decade ago, Dr Lips and colleagues came to begin pre-chytrid surveys at El Cope in Panama. 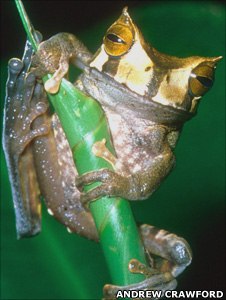 And in this week's Proceedings of the National Academy of Sciences, you can read what they found and what happened in 2004/5 when the fungus arrived.

Before the fungus, 63 confirmed amphibian species were in residence at the site.

In other words, more than half of the species were wiped out or taken to the brink of disappearance from the area in just two years.

For some, that may mean extinction globally, as El Cope is the only place where they have been identified.

Andrew Crawford, the lead author on this paper, said the extent of the damage had surprised the team, even though the initial estimate of when chytrid would arrive in El Cope turned out to be pretty accurate.

Since the post-chytrid surveys, the fungus has continued its spread and has now crossed over the Panama Canal. How it made that crossing is, said Dr Crawford, still something of a mystery - though transport by people, possibly as spores on the soles of shoes inside cars, has to be a strong contender.

Among all the forces that are driving plants and animals towards extinction, chytrid is unusually violent, predictable and intractable; which is why the picture.painted by these before-and-after snapshots is painted in such stark colours.

Years ago, a coral reef scientist in Australia told me of his suspicion that one of the reasons people weren't more concerned about reef declines was because you'd need to observe for a human lifespan in order to experience them as something spectacular and widespread.

That may change, if ocean warming and acidification continue. But the point is well-made; which is perhaps why the UN Environment Programme (Unep) several years ago brought out its Atlas of our Changing Environment, which uses before-and-after satellite images to make changes taking place over decades visual and immediate. 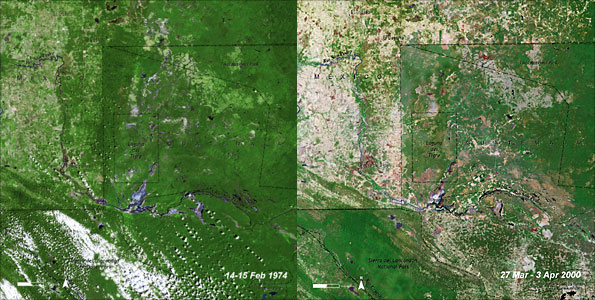 Thanks to the work of Andrew Crawford and Karen Lips, we have a snapshot of what chytrid can do in an instant.

But loss of habitat, including deforestation, continues to be the bigger cause of decline, even among amphibians, as we've discussed before on this blog.

Unep's images show us the disappearing forests; but the changes in the life they support is still hidden from view.