We've had a fair bit of chat here in recent months about diversity in the natural world, and why it matters - with some regular posters asking whether in fact it matters at all. 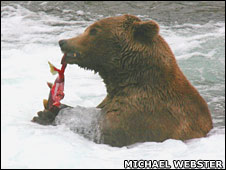 I've tried to lay out some of the evidence - there is quite a lot - showing that diverse ecosystems tend to be more robust and also inherently more productive, which leads to real human benefits when we're talking about an ecosystem that provides something we need, such as food.

This week the journal Nature places another brick in the wall.

Ray Hilborn and colleagues from the University of Washington (the one in Seattle) looked at records from one of the most valuable fish in US waters - the sockeye salmon, sales of which fetched the somewhat mind-boggling sum of $8bn over the last half a century.

(That's just the value of the landed fish - when you take into account other aspects such as tourism revenues associated with recreational fishing, the true value to the US economy is presumably higher.)

Sockeye salmon are especially plentiful in the waters around Bristol Bay on the western coast of Alaska - a large expanse of sea into which nine major rivers empty their waters - and their salmon.

Each of those rivers is fed by tributaries, and some feature topographically tortured sequences of lakes along their length.

What this translates into is a subtly diverse range of habitats for the sockeye salmon. And with their famous homing instincts, the fish have thus segregated themselves into over 100 more or less discrete populations (presumably there is a bit of interbreeding between them) that lead subtly different lives, including coming downstream at different times.

The researchers asked a simple question. Supposing you didn't have all this diversity - suppose you just had one batch of homogenous salmon - what then?

Now, any perturbation (a rough winter affecting something that fish eat, for example, or a big storm on a certain day) is going to affect the entire batch pretty much across their range. 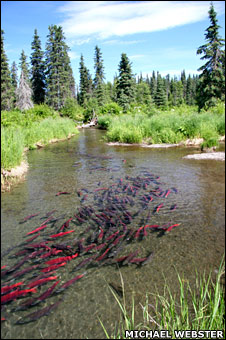 The homogenous population would see much more see-sawing in output, culminating in a ten-fold increase in the number of fisheries closures, the university team concluded.

Because all the salmon would "run" at the same time, the fishing fleet would have to be bigger in order to catch the same total number of fish - a less economic endeavour.

Among the non-economic impacts the team enumerates, salmon diversity improves prospects for predators such as bears, which can get around from stream-to-stream taking advantage of the seasonally-varying abundances.

Would you invest all your money in a single stock (assuming you dabble in such things at all)?

The wise answer would probably be no, and certainly not over an extended period. Unsurprisingly, the extra robustness of the output from the diverse salmon stock is termed here the "portfolio effect".

However, the other conclusion from the paper is that reducing nature's portfolio is exactly what has been going on further south along the Pacific coast.

More populated as these regions are, more altered by the needs of cities and industry and agriculture, nearly a third of the pre-industrial-era 1,400 Pacific salmon populations have been wiped out since the arrival of European settlers.

It doesn't translate into a species extinction or even close, so it raises but small signals in the conservation community; but on the fishing industry, it's probably had a big effect already, simply through reducing the portfolio.

Bristol Bay is not immune from the spread of development and the growing need for resources.

Whether or not there should be oil drilling there has been a live issue for years, and there are proposals on the drawing board for a big multi-mineral mine - Pebble Mine - which opponents fear could pollute local waters, to the detriment of the fish and all that stems from the fish.

Quantifying the economic benefits of the sockeye salmon's ecological portfolio won't guarantee the mine won't be built or that the area won't see vast oil and gas extraction in the coming years - nor should it, you might say, because the world needs oil and gas and copper and molybdenum, just as it needs fish.

But it should make for more rational decision-making, enabling local people and the authorities to factor in more accurately the costs of development as well as the benefits.

And on the broader stage, it provides one more argument for ecological diversity - and why the current loss of it is concerning many policymakers, even as they struggle to find ways of containing that loss.