'Playing God' with the climate?

Biotech supremo Craig Venter's latest foray into "synthetic life" is raising all sorts of questions within the domain of medical and scientific ethics.

One of the potential uses which he's looking at for synthetic bacteria - sucking carbon dioxide from the atmosphere - potentially also breaks new ground in the ethics of human effects on the natural world. 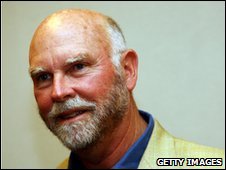 Dr Venter's proposed CO2-suckers, if they ever materialise, would basically constitute a new entry into the field of geo-engineering - using technology to ameliorate human-induced climate change.

Existing proposals include those with a notion of biology, such as using iron filings to stimulate the growth of oceanic plants or switching to growing crops with reflective leaves.

But most lie firmly in the physical domain - whitening roofs, putting a giant sunshade in space, or spraying the atmosphere with dust to mimic the sun-reflecting and planet-cooling effect of volcanic eruptions.

If you tend towards apocalyptic thoughts, here's one for you: out-of-control CO2-sucking bacteria that multiply beyond measure, hoovering up every last molecule of the stuff and leaving none for plants and trees.

OK, it's a bit Night of the Living Dead, I know - but even if your thoughts don't run in a B-movie direction, you might conclude that here is a technology that would require a great deal of contained research and soul-searching and international agreement before it was ever let loose on the natural world.

So far, the international community of nations has been lagging behind the entrepreneurism of start-up geo-engineering visionaries.

Ocean fertilisation was first out of the blocks, with universities and research institutions mounting so far a dozen or so field investigations over the last decade, with mixed results - and with at least two companies, Climos and Planktos, aiming to use the approach commercially. 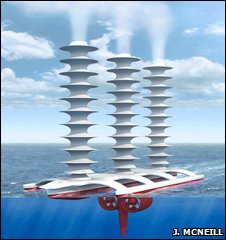 A couple of weeks ago, The Times reported that Bill Gates was funding a project co-ordinated by the San Francisco-based Silver Lining Project that would trial cloud-building - sucking up water from the sea and spraying it into the air, providing nuclei for the formation of clouds that would reflect solar energy back into space.

As Ben Webster noted in his article:

"The British and American scientists involved do not intend to wait for international rules on technology that deliberately alters the climate.

"They believe that the weak outcome of December's climate summit in Copenhagen means that emissions will continue to rise unchecked and that the world urgently needs an alternative strategy to protect itself from global warming."

Russia, too, is seeing the beginnings of real-life geo-engineering experiments.

Last summer, Yuri Izrael - a former deputy chairman of the Intergovernmental Panel on Climate Change and a senior governmental adviser - oversaw experiments that injected sulphate aerosol dust into the atmosphere at low levels, and claimed to see a reduction in solar energy transmitted to the Earth's surface.

I'm told that this summer, the Russian group may try larger experiments that involve ejecting the dust from the back of a plane.

Why senior Russian advisers should be interested in this technology isn't immediately obvious, given that Russia is more lukewarm than most other countries to the idea of curbing global warming, and given that ex-President Vladimir Putin has spoken of the benefits that a bit of warming could bring to his nation.

Irrespective of the whys and wherefores though, the point is that geo-engineering research is happening, here and now.

So far it's been on a fairly small scale. But at some point, if you're talking about technologies with the potential to have a planet-wide effect, you have to move out into the big field - and if you take the IPCC's projections seriously, you'd need to start doing it soon.

How any such large-scale research projects should be evaluated, regulated and monitored - and who should control such undertakings - is an issue that's slowly emerging into the daylight.

The American Enterprise Institute, for example, argues that there should be no real international participation, either in the technology itself or in making rules that would regulate it.

"About 40% of the world's population, mostly those in very poor countries, has not even heard of climate change; therefore, insisting on proof of global informed consent as a precondition for testing climate engineering amounts to saying that climate engineering can never be tested."

"The US constitution enjoins our government to promote the general welfare, and the context is clearly a national one. A US government that allowed abstract notions of global informed consent to block action needed to protect Americans from harm would soon find itself out of office - and rightly so."

Others argue that all the world's peoples are absolutely entitled to have a say in issues that may affect them markedly. 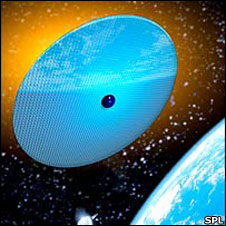 Last year, a paper in Science contended that sun-obstructing technologies could increase drought. And if aerosol deployment in northern Asia, for example, affected the monsoon further south, shouldn't countries such as India, Bangladesh, Pakistan and Nepal have a say in whether the aerosols are deployed or not?

Three years ago, the London Convention, which deals with maritime pollution, declared that deployment of ocean fertilisation should not happen yet: a yes to research, but a no to actual use for the time being.

Since then, the UN biodiversity convention has tightened the line, requesting governments:

"... to ensure that ocean fertilisation activities do not take place until there is an adequate scientific basis on which to justify such activities, including assessing associated risks, and a global, transparent and effective control and regulatory mechanism is in place for these activities; with the exception of small scale scientific research studies within coastal waters."

This had practical ramifications for the German/Indian Lohafex expedition, which endured an on-off existence even as the Polarstern research ship was on its way to dump six tonnes of iron filings into the Southern Ocean (with negligible results, in the end).

For the last two weeks, government delegates have been meeting in Nairobi to make recommendations for measures that should go before October's summit of the UN biodiversity convention.

For the first time in an international treaty organisation, there is a concrete move [58Kb PDF] to go beyond iron fertilisation and apply international oversight across the field - including, presumably, anything that Dr Venter or his genome-engineering peers might come up with.

It tells governments to ensure...

"...that no climate-related geo-engineering activities take place until there is an adequate scientific basis on which to justify such activities and appropriate consideration of the associated risks for the environment and biodiversity and associated social, economic and cultural impacts."

In the time-honoured way of UN matters, the paragraph is swaddled in square brackets, so isn't universally approved - Canada was reportedly leading opposition - but it's likely to receive some kind of airing, if not resolution, in October.

Critics could certainly say it looks vague as it stands - does the word "activities" encompass research, for example, and if so, at what scales?

You could also argue that the potential risks of geo-engineering affect much more than biodiversity, and ask why, therefore, it should be dealt with under this convention.

Activists, though, were delighted that the step had been taken, Neth Dano of the ETC Group commenting:

"Big industry and big science increasingly want to press ahead with geo-engineering either as a 'plan B' or a free pass to avoid reducing emissions.

"It's the big lie that lets them pretend that we can all carry on flying, driving, and consuming- business as usual!"

So there it is: the gauntlet has been laid down to those who argue that research into and deployment of geo-engineering should be left to the world's major powers and the companies that reside in those nations.

But if it's accepted, would that mean research slows to a snail's pace, risking the corollary that if and when we find the Earth needs a sunshield in space, we won't be ready to build one?