"Now that we're in the kitchen, we have to take the heat," said Rajendra Pachauri.

"And we have to recognise that the stakes are very high. So we have to prepare ourselves for criticism, and this is not something we have done in the past."

Indeed not. The worlds of climate science and politics were very different in 1988 when the Intergovernmental Panel on Climate Change (IPCC), the organisation that Dr Pachauri now chairs, came into being. 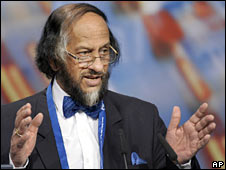 Concern there was about the potential of humanity's greenhouse gas emissions to produce a net warming of the planet's biosphere, which was why the organisation came into existence.

But computers on which scientists ran models were mere calculators beside today's petaflop behemoths; and many of the observation systems that now provide valued data, such as the global flotilla of Argo floats, were barely at the stage of conception, never mind in their infancy.

As a result, the risk of warming might have been perceived as real, but it also went unquantified.

And as a result of that, there was barely a prospect of painful greenhouse gas emission cuts, never mind the wholesale decarbonisation of economies within a few decades that many now advocate.

Fossil fuel lobbyists had barely begun to organise, and a webless world did not facilitate the instant fractious exchanges of angry words and equations - the game, sometimes played on astroturf, that now makes the climate blogosphere as relentless as Shinjuku station in rush hour.

And so we come, via the hockey stick and the passing of the Waxman-Markey bill and "ClimateGate" and Copenhagen and erroneous Himalayan glacier melting dates and the Tea Party movement to this, the start of the UN-commissioned review of the IPCC on a sunny canalside morning in Amsterdam.

The scene in the Royal Netherlands Academy of Arts and Sciences was a world away from the media scrums of the IPCC report launches in 2007, let alone the Copenhagen maelstrom.

The review panel of 12 academics - their CVs richly adorned with professorships and advisorships and awards - sat around a U-shaped table in a bare room while a handful of reporters and support staff scattered themselves around chairs at the back.

At the top of the U were the first people to present material to the review - Dr Pachauri himself and IPCC secretary Renate Christ.

Their presentations consisted mostly of background material about how the IPCC works: how it selects lead authors for its reports, how it relates to governments, how its cycles of reporting run.

Along the way, Dr Pachauri unveiled some issues that had concerned him for a while.

Communications with the public have historically been poor. Support networks are established for the duration of one assessment cycle, meaning that if something subsequently goes awry - such as discovering you've put the wrong date for the melting of Himalayan glaciers in your report - the team that should be in place to assess and deal with the issue has already disbanded. 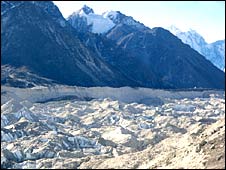 These things are very small beer compared with the assault cannon constantly being fired in the IPCC's direction, and specifically at Dr Pachauri.

The organisation is accused of deliberately selecting report leaders "fully signed up to the global warming theology", as you might put it, and of deliberately excluding dissenting voices through a variety of mechanisms.

It is accused of routinely neglecting the influence of natural climatic cycles in its projections, and of concocting projections of the world's socio-economic future that bear little relation to reality.

Dr Pachauri himself is accused of making money out of promulgating climate concerns, despite recently being cleared of financial irregularities by auditors KPMG.

The last time I wrote about this review - when UN secretary-General Ban Ki-moon announced its constitution back in March - I was already receiving emails assuring me that it was a whitewash, and I don't expect this to change.

Review panel chairman Harold Shapiro, a Princeton University economist and former advisor to both the George Bush and Bill Clinton presidencies, assured me it won't be - they are "neither friend nor foe" of the IPCC.

"...'thoughtful critic' - very very respectable and highly thought of scientists with criticisms of the organisation - we definitely want to hear that."

And anyone can send in comments - they're already arriving, apparently.

What's interesting me is that scientists I've spoken to, both in camps that are seriously concerned about climate change and those that find IPCC projections overblown, want this review to succeed.

By that, they mean changing the organisation as much as is necessary to help it do its assigned job as best it can: improving the quality of its scrutiny, removing inherent biases if they exist, supporting lead authors better as they wade through an every-rising tide of scientific papers, and enhancing communication of findings to the public who ultimately are paying for it.

It's a big task, let's be honest; Professor Shapiro acknowledged as much.

The 12 panellists are already very busy people, and there is a stack of material to get through and an army of people to hear from - and all before the end of August.

One presumes none will be having a relaxing summer break this time around, stuck as they'll be in Dr Pachauri's ever-warming kitchen.