From the UN climate talks in Bonn:

Well, not all of my sins, obviously - that would take more Hail Marys than there are days in the year - but my carbon sins, at least.

Tucked in my back pocket is a piece of paper saying I am "hereby forgiven" for sins such as flying where I choose, using a washing machine, and eating meat.

The "Earth Goddess" who gave it to me marks the most colourful display in "NGO alley", the corridor along which every delegate to the UN climate convention (UNFCCC) meeting here must walk to and from the conference rooms.

Most of the non-governmental organisations displaying their wares are campaigning for carbon controls - the Ecosystems Climate Alliance, the Women and Gender Constituency, EcoNexus - but this Gaia belongs to a group with a completely different agenda, the Committee for a Constructive Tomorrow (CFACT).

Frequently accused of being in the pay of oil companies (which it broadly denies), this organisation has campaigned for 15 years on issues including climate change, on the premise that "the power of the market combined with the applications of safe technologies could offer humanity practical solutions to many of the world's pressing concerns".

One of those manning the committee's table is Lord Monckton, the British peer who has become one of the country's most prominent "climate sceptics" - opposing carbon curbs on the grounds that science does not indicate the necessity, and opposing the UN institutions aiming to tackle climate change for what he sees as unacceptable interference in democracy.

There's no way I can sum up the scientific arguments in a single blog post, but I'll have a quick look at the democracy issue.

His concern - which he has elaborated at length during a series of public talks in the US - is that UN bureaucrats are aiming to take control of countries' elected governments through measures including a new climate treaty.

We walked to the meeting's document counter and took a copy of a document called FCCC/AWGLCA/2009/INF.2 [pdf link] - all documents here fall into this kind of numbering system - this one dates from late last year and was prepared by the climate convention secretariat, aiming to rationalise the highly disordered text that had emerged from preparatory talks in the run-up to Copenhagen.

A passage on page 18 deals with how countries' actions on reducing emissions, adapting to climate impacts and so on might be monitored and verified under a new climate treaty:

"The scheme for the new institutional arrangement under the Convention will be based on three basic pillars: government; facilitative mechanism; and financial mechanism, and the basic organization of which will include the following:

(a) The government will be ruled by the COP (Conference of the Parties, the sovereign intergovernmental body of the UNFCCC) with the support of a new subsidiary body on
adaptation, and of an Executive Board responsible for the management of the new funds and the related facilitative processes and bodies."

The use of the word "government", together with the "facilitative mechanism" to enact decisions, is what aroused the Viscount's ire. He feels it is aimed at exerting unelected centralised authority over elected governments.

Meanwhile, a preceding clause, which says the new treaty

"...should include a financial mechanism and a facilitative mechanism drawn up to facilitate the design, adoption and carrying out of public policies, as the prevailing instrument, to which the market rules and related dynamics should be subordinate..."

...he interpreted as meaning that the treaty would have the power to dictate to all the world's commodity markets.

This text had not been signed off by anyone - it was a draft.

Apart from the US, Lord Monckton told me the passages had raised concerns in some climate convention delegations from Eastern Europe, mindful of their long years without democratic freedoms.

I'd urge you to read the relevant passage, and make up your own mind as to whether it constitutes a global threat to democracy.

Earth spirits were deployed in a very different way - and only abstractly - during a news conference with Bolivia's permanent representative to the UN, Pablo Solon.

The Plurinational Republic of Bolivia (so called because of its multi-ethnic population) believes that rather than aiming to keep the global temperature rise to 2C, as advocated by the EU and lukewarmly endorsed in the Copenhagen Accord, the target should be 1C.

As we are already about 0.7C from the pre-industrial benchmark, that would be a very tall order technically even if there were the global political will; but Mr Solon said that even now, Bolivia's glaciers are melting, causing problems with water availability (something my colleague James Painter reported on recently), and asks what will happen to people and the natural world if the existing temperature rise is tripled?

"At 2C, there is the risk that 25-30% of biodiversity can be affected," said Mr Solon, referring to projections in the 2007 report of the Intergovernmental Panel on Climate Change (IPCC).

"Are we willing to say that's a good goal? No, that's not a good goal."

Bolivia's refusal to endorse the Copenhagen Accord has led to the US withholding aid money designed for climate protection projects - Mr Solon accused Denmark of doing the same - but, he said, as a nation with "dignity", that would not change its position. 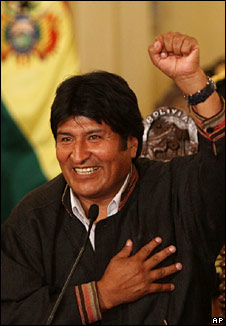 Later this month, Bolivia will host the World People's Conference on Climate Change and the Rights of Mother Earth. About 15,000 people are scheduled to attend, including representatives of about 100 governments - 10 at Heads of State level.

Civil society groups - non-governmental organisations - will be well represented, he told us, which is crucial to developing a good global climate policy.

"If people of the Earth don't engage in this process we have now, the results are going to be terrible."

As well as themes that reflect the UN process - cutting emissions, spreading clean technologies - the conference will debate issues such as "climate justice", and whether there should be a worldwide referendum of people to give governments some kind of global mandate on the issue.

A declaration on the "Rights of Mother Earth" - paralleling the Universal Declaration of Human Rights - is likely.

Bolivia's President Evo Morales comes from the indigenous Aymara people, and in Copenhagen spoke eloquently of the link between people and "Mother Earth".

He wants us to use a wider sense of Mother Earth and our guardianship of Earth, and derive policies on issues such as climate change from a deep ecological understanding rather than from Powerpoint presentations in hotel conference rooms in places such as Bonn.

The Committee for a Constructive Tomorrow's Gaia forgives us our sins; Evo Morales's will punish us for lack of care.