As anyone who's ever dressed a salad in vinaigrette will testify, oil and water just don't mix.

That's especially true of crude oil and sea water that supports sea lifeforms from fish to birds to plankton to mammals.

So when we discover that 42,000 gallons of oil are leaking daily from a stricken well at the bottom of the Gulf of Mexico, and that it could take months to stem the flow, a little concern is entirely natural.

If the pessimistic "several months" timeline turns out to be correct, and if the oil continues to gush at its current rate, we could be looking at an eventual volume of 4 million or so gallons - which puts it in the same league as the Exxon Valdez spill of 1989 (11 million gallons) or the Hebei Spirit incident of 2007 (2.8 million).

However, past experiences may be a poor guide when it comes to projecting damage from the Deepwater Horizon rig.

Firstly, this is what you might term a slow, sustained release some 60km from the edge of land, whereas most recent spills have resulted from the sudden, catastrophic impacts of tankers close to the shore.

So whereas the oil from the Exxon Valdez, or the Prestige that impaled itself on Galician rocks in 2002, was virtually certain to come on shore, there's no guarantee the coasts around the Gulf of Mexico will be impacted this time. So far, weather conditions have confined the slick offshore.

The coast of Louisiana, seen from the air, is one of the planet's most extraordinary pieces of topography. (Have a look on the Google map satellite view).

Long tendrils of land curl out into the sea like some skeletal fern, encompassing channels that carry Mississippi water far out into the gulf.

The inaccessibility of these extremities and the fertile waters have created ideal nesting grounds for birds such as the locally endangered brown pelicans.

The unusual topography of land and water in the Breton National Wildlife Refuge, about 100km to the north of the stricken oil well, supports an unusual mix of seabirds, wading birds, rabbits and loggerhead turtles in vegetation that includes mangroves. 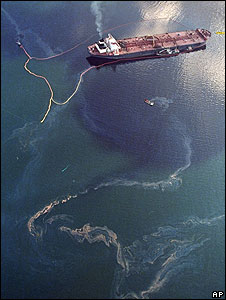 If the slick heads east, it will eventually encounter the equally ecological important Florida Keys - and beyond that, the Bahamas.

Whether it does end up in one of these important areas, or whether it disperses quickly and relatively innocuously in open water, is conjecture for the moment.

However, the possibility of environmental damage plus the loss of 11 lives during the rig fire is already prompting questions about the oil industry's place around US coasts.

Areas of the Gulf of Mexico just east of the Deepwater Horizon site are among those where rigs could be permitted in future.

The measure was, in large part, a concession aimed at securing wider support for the climate and energy bill being re-framed by the cross-party Senatorial triumvirate of Joe Lieberman, Lindsay Graham and John Kerry (co-incidentally, a process that appears in some disarray right now).

Key aims of the new bill are support for the US energy industry and a desire to reduce US dependence on oil imports.

But even as these measures promise to create employment along US shores, the risks attendant on oil exploration and production have the potential to take away livelihoods, such as those of fishermen who are already expressing concern about the leaking well.

So it's not a simplistic equation. It's about risks and uncertainties, including the vagaries of currents and tides. It's about political and economic trade-offs, and about balancing short-term and long-term risks and benefits.

The US authorities are deploying a battery of tools against the Deepwater Horizon slick - when weather permits - including booms and dispersants.

Will they prove effective? Will the submersibles now being deployed to block the well's flow be able to finish the exacting task?

The fishermen, the bird-lovers and the oilmen all have an interest in the answers.