The attack of the killer everything

About two decades ago, the world's frog experts realised they were characters in the opening chapter of a detective novel.

It wasn't so much a whodunnit as a wotisdoinit - killing, that is, frogs and salamanders in different parts of the world at a rate that merited the description "dramatic". 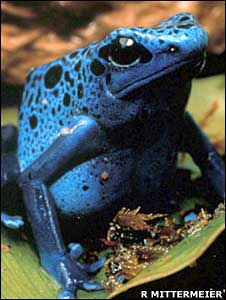 The pages were littered with suspects: pesticides, the ozone hole, global warming, disease, invasive species, farming... the list went on and on. And with it a question; was any one suspect working alone, or in a gang?

Now we know that there are two prime movers in the ongoing amphibian massacre. One is the fungal disease chytridiomycosis; the other is... everything.

Well... yes, everything - or pretty much, anyway.

While the chytrid fungus has blown whole populations away single-handedly in a season's shooting spree, many species undergo a slow, inexorable decline more akin to starvation or an ancient torture; squeezed into corners by the expanding human habitat, poisoned by farmland chemicals, eaten by bigger invasive neighbours, hunted for meat, stressed by temperature rise and stalked by viruses - or any combination of the above.

As the plot of that detective story becomes clear, it seems that scientists are beginning to write another with a very similar narrative, but this time with bees cast as the victims.

Bee populations - wild and cultivated - have always had their ups and downs, their years of plenty and years of absence. But about five years ago, commercial beekeepers in the US began reporting total wipe-outs of hives on a scale not documented before, leading to the term colony collapse disorder (CCD).

Since then, the phenomenon has been noted across much of Europe, with indications that it's gone further afield - to Brazil, to Taiwan.

There's some doubt as to whether CCD exists as something new or whether it's just an extreme form of a hive decline that's usually more gradual. Whatever the realities of that, it's clear that wild bee populations are also declining at serious rates, both Apis mellifera and other species such as bumblebees.

The search for a cause - an aetiology, in medical parlance - has once again focused on individual suspects: disease, pesticides, climatic change, loss of genetic diversity, urbanisation, etc etc etc - even the use of mobile phones.

Once again, as the pages turn, a more complex picture emerges of a syndrome that might well have multiple causes - indeed, that might have a different mix of causes in different locations.

The latest twist in the plot comes from the French National Institute for Agricultural Research, where scientists working in the lab have found a link between the health of hives and the diversity of plants on which bees forage for food. 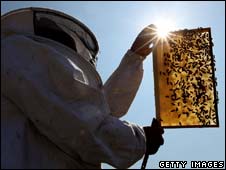 Although the finding needs to be confirmed in field trials - which the team is hoping to instigate - the indication is that a diet of diverse pollen gives the bees the amino acids they need to synthesise their full panoply of chemical defences against pathogens.

A reasonable hypothesis, then, would be that if you put your bees to work pollinating one particular crop all summer and feed them on one particular food all winter, such as corn syrup - as is the practice in US commercial hives - they're going to fall like insects out of the sky when an unpleasant disease comes along.

Along with that goes the notion that if you lose a diversity of wild plants, you'll begin to impact wild bees. (The reverse may also apply, a little more intuitively.)

A recent study using records kept by amateur naturalists in the UK and the Netherlands suggests that the diversity of bees and flowers have been declining at similar rates for more than a century - a conclusion that could suggest the causes are intertwined.

If a monoculture diet was the only issue, perhaps it wouldn't matter; perhaps the insects would survive.

But add in a lack of genetic diversity among commercial stocks, the use of pesticides and other agricultural chemicals to which they may be somewhat sensitive, changes to the availability of water brought about by everything from man-made climate change to dams, the greater mix of pathogens that commercial bees must encounter as the hives travel from one workplace to the next, the declining extent of "natural" habitat for wild bees, and so on and so on and so on - and once again, "everything" becomes a reasonable suspect.

If this is right - and other branches of the natural world such as coral reef ecosystems are also under multi-frontal attack - it raises a pretty obvious problem: how do you combat "everything"?

A small but growing number of amphibian species now exist only in reserves or captive breeding programmes - special places set aside for them. The only way to defend them against the multiple attacks of the real world is to take them out of the real world.

That option does not exist for bees - especially for colonies and populations and species that we do not domesticate, that live in the wild and pollinate many of the plants on which they forage.

You might defend them against disease with a treatment, or against harmful pesticides by finding a more sympathetic substitute, just as you can find a medical treatment for the clear aetiology of a broken leg or a defective heart valve.

But just as there is no medical treatment for old age, there is no defence against everything - nor is there ever likely to be.

Which leaves us with what conclusion to the story?