It's cold in Kirkcaldy, freezing in Frankfurt and brass monkeys in Bryn Mawr... a winter spell with weather that's unusually - well - wintry.

But not everywhere; in fact, other places in the Northern Hemisphere are seeing weather that's unseasonably warm.

In Goose Bay in Newfoundland, it's barely getting below 0C - bikini weather, relatively speaking, given that the average minimum for January is -23C.

The cause of what one weather service refers to as these "upside down" conditions is an extreme of the Arctic Oscillation (AO).

Essentially, air pressure is measured at various places across the Arctic and at the middle latitudes of the Northern Hemisphere - about 45 degrees north, roughly the latitude of Milan, Montreal or Vladivostok.

The difference between the average readings for the two latitudes gives the state of the Arctic Oscillation index.

A "positive" state is defined as relatively high pressure in mid-latitudes and relatively low pressure over the polar region. "Negative" conditions are the reverse.

And what we have at the moment is an unusually extreme negative state.

The graph below comes from the US government's Climate Prediction Center and shows the variability of the index from 1950 to 2009. 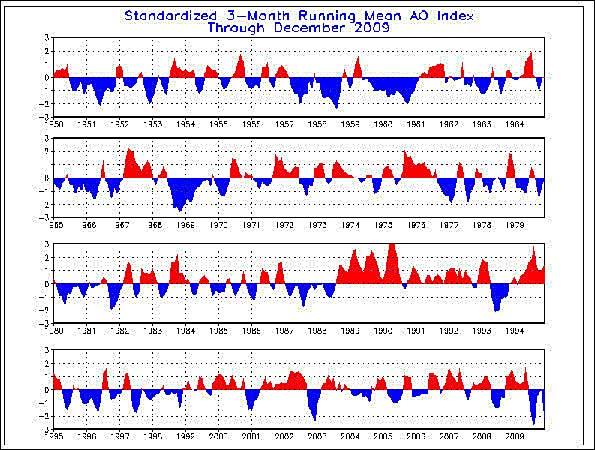 The text on the graph is a little unclear as I've had to shrink it a bit, but you can see at the bottom right the current negative conditions developing during December - and here's the original.

Over at the New York Times, they've compiled a different graph that shows how extreme these few weeks are turning out to be - unmatched since the early 1960s, a period that saw several winters in the UK featuring extended spells of cold, snowy weather.

What the negative AO conditions mean is that cold air spills out of the Arctic down to mid-latitudes, which this time round includes much of Europe, tracts of the US and China.

For the UK, this implies a higher chance of cold northerly or easterly winds.

But if you live in places that are usually cold at this time of year - such as Goose Bay - you'll see a concomitant rise in temperatures compared with what happens during "positive" AO conditions, when the cold air is confined to more northerly latitudes. 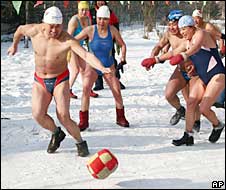 A little more than a decade ago, I visited Yakutsk in Siberia which lies close to one of the candidates for the title of "coldest place on the planet" - the village of Oymyakon, which has seen the mercury plummet as low as -71C.

I don't know how balmy it is in Oymyakon right now but in Yakutsk itself, the daily minimum is a mere -35C - that's 10C warmer than the January average.

Despite the name "Arctic Oscillation", there's little discernible pattern to how the pressure difference varies, or what causes it - perhaps "Arctic Random Fluctuation" would be a better name.

Some researchers have linked an apparent increase in the average state of the index from the 1960s to the 1990s to man-made global warming, but you would have to say the jury is definitely still out.

(The AO is linked to another naturally varying phenomenon, by the way - the North Atlantic Oscillation (NAO), the variability in the pressure difference between Iceland and the Azores - in fact, some hold that the NAO is just a sub-set of the AO.)

Why the cold weather?

The current big chill is a result of high pressure over the polar region, which has pushed cold air out of the Arctic towards much of northern Europe, parts of Asia and the US. Winds from the north and north east, rather than the south and south west, have brought freezing temperatures to the UK.

Winds from the north also brought cold weather to parts of Asia, with Beijing receiving its heaviest snowfall for nearly 60 years. At the weekend, up to 30cm (12in) of snow fell in China's capital and its neighbouring port city of Tianjin. Dozens of people have also died in a cold snap in northern India.

However, while parts of the world suffer freezing temperatures, the seesaw patterns mean other areas are warmer than usual, including Alaska, northern Canada and the Mediterranean. Met Office figures for the end of 2009 show some places dropped 10C below the average, while others were 10C above.