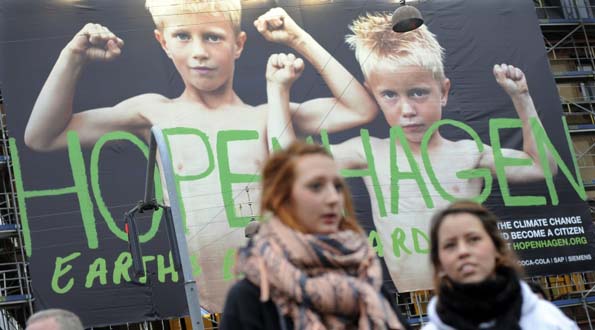 Everywhere you go in Copenhagen, you're met with two kinds of advertising poster.

One sells lingerie, the morning walk to the railway station bringing a sequence of scarcely clad models smiling unfeasibly in the freezing morning air.

The other sells hope. "Hopenhagen" has been the city's alternative name for the past fortnight, a campaigning city promoting its dream on banners, along with periodic exhortations to "seal the deal" and "bend the trend" (the trend of rising emissions, that is).

As the UN climate summit ends, the question is whether it brought the beginning of hope, or the end.

Depends on your point of view on climate change, of course. But for the thousands of campaigners here, the climate scientists, the delegations from small island states, what "hope" meant was clear; to secure a deal that would put our global society on course to prevent "dangerous anthropogenic interference with the climate system".

Not my phrase, that, but the key clause in the UN climate convention (UNFCCC) - agreed, lest we forget, at the Earth Summit in Rio de Janeiro way back in 1992.

The mandate to reach a new agreement here was agreed in Bali two years ago, after the last report from the Intergovernmental Panel on Climate Change (IPCC) appeared to convince governments that dangerous anthropogenic interference with the climate system was not being prevented.

"A shared vision for long-term co-operative action, including a long-term global goal for emission reductions."

Did they get it? No. Reading behind national positions, disagreement about even the most basic measure - the size of temperature increase that countries would like to see - ranges from 1C to 3/4C

Did they get it? Yes, except for the US, where MRV is not yet flying - no change there.

No; unless "verifying" means "believing what a country tells you it is doing".

"Improved access to adequate, predictable and sustainable financial resources... and the provision of new and additional resources."

Yes - kind of. There is money pledged, for sure, and a fund to run it.

Whether it's "predictable and sustainable" is another matter. The short-term "fast-start" finance should be, as it's mainly from the pockets of Japan, the EU and US; the longer-term stuff depends on mechanisms that don't yet exist and might encounter political obstacles.

As you'd expect, leaders from EU countries and the developing world states that really don't like this deal at all have been assuming rictus grins and telling us it's a "good first step".

Where we go from here isn't clear at the moment; and even people who have followed this issue for years don't have ready answers.

What appears to have happened is that the UN process was effectively ambushed by countries that perhaps don't want there to be a UN process.

Which countries they might be doesn't take a detective of Sherlock Holmes' prowess to work out; look for ones that haven't signed up to the UN Convention on the Law of the Sea or ratified the UN biodiversity convention, and another that does not on principle allow international oversight of anything.

Intriguingly, the morning after the deal was announced by White House press release, it wasn't clear whether it counts as an agreement within the UN system or whether it lies outside.

If parties had adopted the deal, it would be a UN issue. But they didn't, because there was no consensus; instead governments only decided to "take note" of the accord.

If it turns out not to be a UN agreement, then - at the extreme end of things - the UN climate convention could effectively be dead as the powerful world's favoured instrument for controlling emissions.

A deal made at a UN summit would move outside, being a free-standing arrangement effectively decided by the 26 countries involved in the drafting.

It will mean that a select group of countries - the G20, or thereabouts - will basically decide what they want to do, and then do it.

That might sound like an extreme analysis, and perhaps it is; but in the last few years, climate pledges have been made in the G8, the Major Economies Forum and the Asia-Pacific Economic Co-operation forum (Apec) - all places where countries can say what they want with no pesky small states around to demand that they do more.

Don't forget that there has been no real negotiation here on targets for developed nations. Sessions have been held, yes; but all developed countries set their own targets before they arrived, and stuck to them.

In principle, poor countries would lose from a transition away from the UNFCCC, because its mechanisms are supposed to bring them access to clean technology and money for forests and climate protection.

Approaching the summit, it appeared that pretty much all the countries wanted a new global climate deal under the UNFCCC umbrella. Politicians from many countries invested significant diplomatic effort to make it happen - apparently.

The concluding sequence of this much-hyped summit has left many observers and national delegations stunned.

Ministers and officials and scientists and campaigners and lobbyists who have dedicated huge swathes of the last year to making a tough deal happen watched aghast as Chinese and US leaders and their entourages flew in, took over the agenda and emerged with what was basically their own private deal, with leaders announcing it live on television before others realised it had happened.

Does Copenhagen, then, mark not the beginning of a new global climate regime but the end of the vision of global, negotiated climate governance?

Is it the end for the idea of global, negotiated governance on other environmental issues?

These are big questions that many never saw themselves having to ask in the Obama era.

In cafes and bars around (No) Hopenhagen, they're being asked now.