UPDATE 1159 CET: Now a group of countries (Bolivia, Saudi Arabia) is arguing that the deal reached last night is not a proper agreement under the UN climate convention, but lies outside.

The summit didn't "adopt" it, but "took note" of it - because not all countries wanted it.

What sort of agreement would that make it?

UPDATE: 1035 CET: I'd run through in my head several ways this morning's final session might turn out, but I didn't see this one coming.

A group of developing countries is, I think, trying to make some elements of the deal made by Wen Jiabao, Barack Obama and so on last night legally binding.

During a long, long adjournment, they've had quite a bit of time to look at this and there are lots of clever lawyers in the hall accustomed to using whatever opportunities they have.

It's a nightmare to follow - lots of document-speak, which doesn't translate into English very easily after 30 hours without sleep - but we'll make sense of it somehow.

UPDATE: 0835 CET:The session's been adjourned now for about 45 minutes while delegates try to find a way through this impasse.

I've been passing a little time reading a highly entertaining account by AFP's Stephen Collinson of "how the deal was done" - well worth a look.

UPDATE - 0722 CET: Remarkable how the great swathe of developing countries is divided by the "deal" announced last night by President Obama.

We have some small island states in favour, and others against. None of them likes a deal that they feel may consign them to a future under the waves; but some, perhaps most, are choosing to accept it, either because they know there's nothing else on offer, or because wider political considerations have swayed their hand.

The African Union appears to be onside - presumably steered by Ethiopian President Meles Zenawi's endorsement on Wednesday of a proposal to raise $100bn per year by 2020 for poorer countries - the sum, not co-incidentally, that Hillary Clinton said the US would work towards raising.

But a group of Latin American and Caribbean countries appears adamant in its view that the deal was done illegitimately; and for that reason, and because it will not cut emissions enough to meet the IPCC's criteria for keeping the global temperature rise within 2C, they feel it cannot be endorsed.

The wider conference "never gave a mandate to a small group of 25 countries to draw up such a document", the Venezuelan delegate has just said.

And when they resolve this impasse, there's a mass of other formal stuff to conclude.

Meanwhile, tired negotiators and environment ministers - most now deserted in the cold Copenhagen dawn by their prime ministers and presidents - are talking of the need to speed things up to catch flights home.

UPDATE - 0410 CET: Things getting lively in the main meeting now, after the "deal" was introduced for consideration by countries not involved in its making.

Tuvalu said it couldn't accept the deal, because it amounted to "30 pieces of silver to sell our country".

Venezuela, Cuba and Nicaragua lined up in support, with the last-named introducing two documents for consideration. They would effectively restart negoations on issues such as futher emission cuts from developed nations that the "deal" effectively brings to an end.

Watch this space... we could be in for a bumpy ride...

Swedish Prime Minister Fredrik Reinfeldt and European Commission President Jose Manuel Barroso were clearly less than delighted with it at their news conference.

Asked where EU leadership had been, Mr Barroso replied:

"We have been leading, but we were not leading when it came to lowering the ambition."

0043 CET Saturday: Now, we are totally - totally - into uncharted territory.

A US president has reached a climate change agreement with leaders of just four countries - although a few more clearly had an inkling of what was going on. 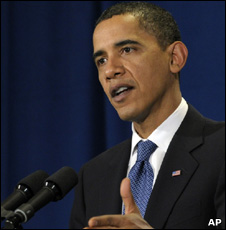 The White House announced the deal - this is supposed to be a UN convention, remember - and President Obama has gone live on US television telling viewers what it contains before many delegations in the UN conference even had a chance to look at the text.

It's not clear how those outside the little cabal of nations are going to play this.

The African Union is officially in favour so far, but they're having a closed door meeting that I understand is lively, with Senegal among countries opposing.

I've been told that some of the small island developing states have been "told" to sign up, but others are fuming and determined to oppose - especially as their key demand, inclusion of at least the indication that the world could eventually look at 1.5C as a target for temperature rise, was excised at the last minute.

Ask who the "villain" is, and - as I mentioned in my previous post - "China, China, China" is the refrain.

But there is considerable anger towards the US, too, as I indicated before.

The fact that the EU hasn't endorsed this "deal" yet it absolutely significant, as European leaders have until now been prepared to work with the US, though wishing it were in a position to pledge more.

Procedurally, there's no precedent. Asked how things stood, one observer replied with a six-letter word unprintable on a BBC webpage - it begins with an f.

It appears the document - which is written in the guise of a UN text - goes back to the plenary session, which will convene we don't know when.

Frankly, your guess is as good as mine. Any international law experts out there who can advise?