Plan B for Planet Earth

"Geo-engineering is not an alternative to emissions reduction."

So not Plan A, then.

So perhaps not Plan B either.

The words are John Shepherd's, spoken at the launch of the Royal Society's report into whether technical fixes such as painting roofs white, putting giant parasols in space or pumping iron filings into the ocean could curb climate change.

Professor Shepherd chaired the 10-month inquiry, and was keen to emphasise that although some of the technologies might have a role to play one day, today is not that day.

For some options, he said, "the technology is hardly formed". Many others "are still at the conceptual stage".

So further research - and pretty quickly - is the biggest single recommendation.

But the study does break new ground in attempting to rank the different contending technologies according to how effective they're likely to be, how much they're likely to cost, how safe they appear, and how quickly they could be deployed. 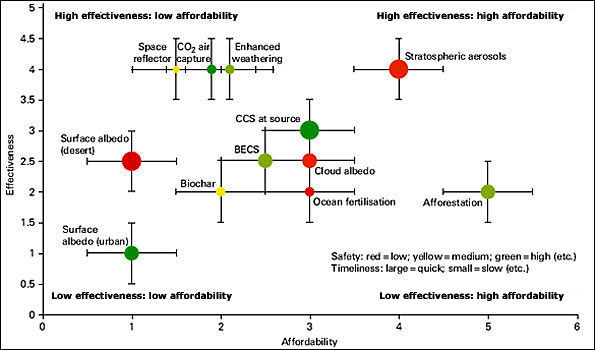 So the most cost-effective, overall, is probably pumping dust into the upper atmosphere, mimicking the impact of volcanic eruptions that are known to produce a net cooling by reflecting sunlight back into space.

Studies indicate [pdf link] that putting a few million tonnes of sulphate aerosols into the stratosphere every year could counter the extra heating from a doubling of atmospheric carbon dioxide; and the cost would be "just" a few tens of billions of dollars per year.

However, this would be nothing to combat ocean acidification - another impact of rising CO2 emissions. There are issues of who controls it and who funds it, and it has to be done for probably a century at least - stopping the programme while greenhouse gas concentrations remain high would result in abrupt warming.

So it's risky, in the report's judgement.

In fact, there is not a single technology that scores well on all the parameters.

Planting forests is judged to be safe and cheap but not particularly effective. Putting reflectors in space emerges as probably effective, but at high cost in terms of money and risk. Changing the reflectivity of the planet's surface, although safe, is unlikely to do much good and carries a high cost. 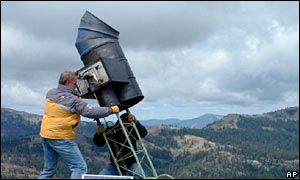 And so on. Technology by technology, the potential silver bullets acquire a tarnish of one hue or another.

For technologies that work in the global commons - in the atmosphere or the oceans, or in space - the Royal Society emphasises there should be an internationally agreed set of rules for research, never mind deployment.

Perhaps the biggest paradox in the whole field is that the technology that has received the most research - iron fertilisation of the oceans - is now rated as quite expensive, of unproven worth, and one of the least safe in terms of its potential for upsetting the ocean ecosystem.

Yet it remains of commercial interest, with one company, Climos, seeking to prove its efficacy in order to generate income from a global carbon market.

To anyone who has followed the issue for some time, the Royal Society's conclusions can hardly come as a major surprise.

About 18 months ago, I chaired a panel debate on the issue at the European Geosciences Union (EGU) annual scientific meeting in Vienna.

It was one of those "debates" when actually there was very little disagreement between panellists over the substance.

At the end, we took a show of hands from the audience (almost all scientists, some active in the climate field and others not). They too were almost unanimous; geo-engineering could not replace carbon cuts and was not ready for "prime time" use, but research now, on a small scale, was a good idea. 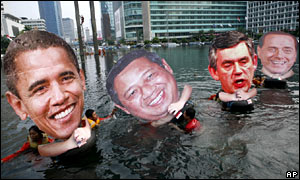 The approach had potential merits, it said, but:

"Research to date has not determined whether there are large-scale geo-engineering approaches that would produce significant benefits, or whether those benefits would substantially outweigh the detriments."

And just last week the UK's Institute of Mechanical Engineering released a report, which although phrased a tad more bullishly than the Royal Society's, reached the same broad conclusions:

"Geo-engineering is not an encompassing solution to global warming.

"It is however, another potential component in our approach to climate change that could provide the world with extra time to decarbonise the global economy, a task which has yet to begin in earnest."

There, I think, is the rub. In John Shepherd's words:

"We believe it is still possible to combat climate change through emissions controls - if the international community is more successful than it has been."

And if the international community isn't more successful than it has been - notably at the UN summit in Copenhagen in December - then, perhaps, calls to invest in Plan B will receive a more sympathetic hearing.

The Royal Society's case for getting research underway is simply that society should understand the impacts and costs of the various options in good time. Then, if a key tipping point does appear on the horizon, society could make a rational decision whether to deploy.

Some environmental groups counter that even talking about the possibility of technical fixes may reduce the urgency of attempts to curb emissions - although it's going to be pretty hard to stop scientists and science academies talking about them as summit after summit passes and emissions continue to rise.

The Royal Society's is, I think, a rational case. But it has been for some time.

Questions such as so who's going to get on and do it, who's going to fund it, and when will an international framework be ready to regulate research (never mind implementation) are, presently, quite a lot less tractable.