It comes from an unexpected source: but Nasa's just-released finding that water tables in the northwest of India are falling by about 4cm (1.6in) per year is a striking microcosm of the unsustainable strain that modern societies are putting on the Earth's natural resources. 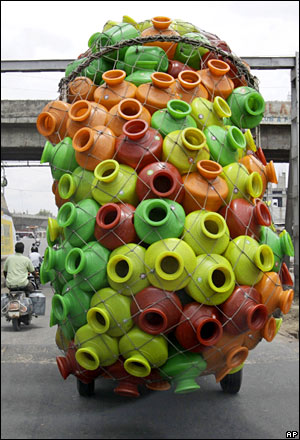 This is a region that is home to more than 100 million people.

And they're not using the water for long, languid baths or spraying it on manicured lawns; more than 90% is used simply to grow the staple crops that feed Delhi and the regions around.

More mouths to feed means a demand for higher yields, which implies irrigation - mining the water at a rate faster than nature replaces it - a process that is, by definition, unsustainable.

The Indian government's latest assessment of the environment nationwide [pdf link] - also released this week - shows that water is just one of the resources being depleted as the population expands (tripling in 50 years, according to government statistics) and the economy gathers pace.

Nearly half of the land surface is degraded in some way, air pollution in increasing, some unique species and ecosystems are threatened by development, waste from uncontrolled urbanisation is emerging as a health issue - so the litany goes on.

And climate change now threatens to exacerbate many of the existing problems - progressively eroding the Himalayan glaciers that provide water for so much of the country (for more than a billion people across South and East Asia), reducing crop yields, salinating aquifers around the coast, increasing the need for energy.

Water, energy and food security are a triple whammy of major issues for the years ahead, the government concludes.

Can technology help? In principle the storage function of disappearing glaciers could be replaced by reservoirs; agriculture's need for water could be curtailed through such approaches as laser precision ground levelling and direct dry seeding; switching to cleaner fuels (which has already happened to some extent) could purge city air of its pollutants.

But coming up in the rear - as the government report acknowledges - is the juggernaut of a growing human population. 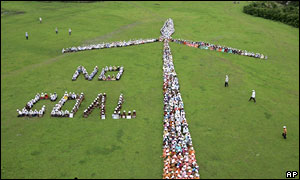 It now stands at just over one billion and is forecast to increase to 1.6 billion by 2050, which the report describes as "hinting towards an alarming situation".

India's looming multi-faceted environmental crisis is not unique. Globally, relentlessly, too many people are chasing too few resources; and now comes research showing that after decades of decline, fertility rates in many developed countries are rising.

For the first time in 40 years, for example, French couples are having on average two children each; what this all means for the much-cherished "demographic transition" can only be guessed at.

Next week, another major report will show that India's water problems are increasingly replicated in other parts of the world - a growing global thirst, and a dwindling supply.

Nearly 40 years ago, governments, through the UN's first environment summit, acknowledged that the world was on a path of unsustainable development and vowed to do something about it.

What marks would you give them - and, indeed, the whole human species - for success?