I was hoping to blog today from the UN climate talks in Poznan, Poland, where I'm due to spend the rest of the week.

I had been intending to spend a few hours sampling the mood, taking the temperature, chewing the cud, and lots of other cliched things that journalists do when they arrive somewhere new and aren't completely sure what's going on, before delivering to you a distillation of the assembled wisdom. 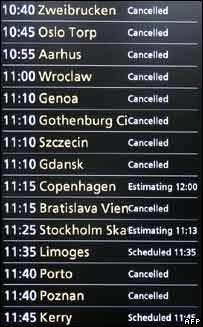 However, the action by climate protestors which closed the runway at London's Stansted Airport this morning meant a cancelled flight, so I am writing this during a few hours back at my house before trying again.

So all I can do is to pick out a few of the themes that emerged during the first week of the meeting, and offer an initial take on what it looks like from a distance of many hundreds of kilometres.

As we all knew beforehand, there isn't going to be a major deal at the Poznan meeting - that's scheduled for the next one in Copenhagen in a year's time.

But several things can be resolved in Poznan, including raising and managing funds to help the poorest countries prepare for potential impacts of climate change, and setting up a process to pay countries with abundant forest to protect that forest.

On the first issue, a long-running dispute between developed and developing countries over how to manage the UN Adaptation Fund, which channels money from the international carbon market into climate protection, appears still to be a live issue.

The developed countries paying the money regard it as theirs; but so do the developing nations, who argue that it is merely what the west owes them for having created the problem of man-made climate change. 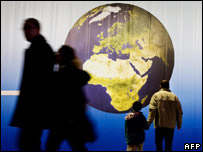 So last week saw fresh objections from developing states - and the group of NGOs that acts with them - to having the World Bank involved in its management, or indeed in the management of any UN funds connected with climate change. They say that the bank is in the political pocket of the west, and that some of its development programmes effectively fund deforestation.

The fund contains nothing like the $50bn that development agencies believe is a necessary annual sum, which also grates with developing states.

But especially in straitened times, are developed countries going to cough up more - especially to a fund whose management they are not happy with? One Japanese delegate reportedly said [pdf] that rich governments could not become "the ATM for the world".

Discussions on reducing emissions from deforestation and forest degradation (REDD) appear to be throwing up some important ethical and philosophical dilemmas.

A good idea in principle, virtually everyone involved agrees, because deforestation accounts for about 20% of greenhouse gas emissions (considerably more than aviation, incidentally) and is relatively cheap to fix.

But some groups charge that western countries are too keen on it because they can effectively "buy" emission reductions abroad and continue with business as usual at home. Others say that it should be a priority because preserving forests intact has benefits for wildlife as well; the UN Environment Programme, to prove the point, released an "atlas of carbon and biodiversity" last week showing that forest areas important for storing carbon also tend to be important ecologically.

But what about indigenous peoples who live in the forest? There appears to be quite a degree of concern that not enough priority is being given to their needs in the REDD discussions.

The first week's talks have brought fairly predictable condemnations from environment groups that western nations are not doing enough to curb their greenhouse gas emissions, either in the scale of the cuts they are contemplating or in the cuts they are actually implementing.

Perhaps the most significant events are taking place away from Poznan, as EU countries try to finalise their climate and energy package which will include a unilateral commitment to reduce emissions by 20%, or by 30% if a global deal materialises.

Saturday saw a meeting in Gdansk where President Nicholas Sarkozy of France - which currently holds the EU presidency - tried to alleviate the fears of the Poles and others that the package would come with a crippling price tag.

That brought some progress but no final agreement - so we wait for the EU heads of state meeting later in the week in Brussels.

The outcome of that matters in Poznan because Poland - the leading critic of the EU package - is co-chairing the UN talks as host nation and if the EU is seen to be faltering in its commitment to curb greenhouse gas emissions, we can expect the rest of the world to be less enthusiastic.

From tomorrow, I'll do my best to keep you up to date with the substance and the froth of the Poznan talks from a closer vantage-point - assuming there are no further runway closures to contend with.