It's not a good day for the artist Thomas Heatherwick, who, along with his sub contractors, must find £1.7m to pay damages to Manchester City Council for his disintegrating sculpture, B of the Bang.

I met Thomas in 2005. That was when B of the Bang was touted as one of the most exciting pieces of public art around. He was so enthusiastic about the piece. And he had good reason. Named after something the athlete Linford Cristie had said about leaving the blocks "on the 'B' of the Bang" of the starter pistol, it is a 180-tonne starburst of metal spikes, redolent of that explosion of energy at the beginning of a race. 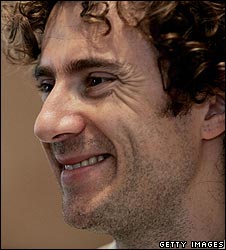 It looked like a major engineering feat, but then bits started falling off, and a public work of art had to be cordoned off for the safety of the public. Around that time, Heatherwick was being talked about by many as a man with a glittering future and international commissions were coming his way thick and fast.

It is hard to categorise Heatherwick: his work involves artistic ideas, innovation, engineering and design knowledge. This is a major blow to him and I suspect he is profoundly disappointed. The damages alone could set him back years, though it's not clear how much he has to pay and how much the sub-contractors will pay.

But it doesn't have to be disastrous in creative terms. Heatherwick is an original thinker and this setback shouldn't prompt people to write him off. I'm hoping to speak to him this afternoon so I'll update you later.

I'm Razia Iqbal, the BBC's arts correspondent. This blog is my take on the UK's arts and culture scene.

You can stay up to date with The Reporters: Razia Iqbal via these feeds.