Loved The King's Speech, and was delighted to see it triumph at the Oscars. It was the only film we've ventured out to the cinema to see since the birth of our baby boy, and we had the weird experience of hoping throughout that Colin Firth would speak fluently and that our son would not make a sound. Happily, as the final credits rolled, we could report success on both counts.

I cannot wait for the DVD to come out, if only to listen the audio commentary that provides more texture, context and an insight into what was going on in the director and writer's heads when they wrote the screenplay and filmed the scenes. What will they say of the Australian speech therapist Lionel Logue's opening line: "I'm on the loo?"
"Here we wanted to convey that Australians are prime vulgarians with decidedly iffy manners," perhaps they might say.

Similarly, Logue's insistence on "total equality" in his consultations with Prince Albert is clearly intended to underline how the Aussies are far more socially egalitarian than the class-obsessed Brits. Ditto, his demand that the Prince agree to the use of his first name, Bertie, rather than the more formal HRH. 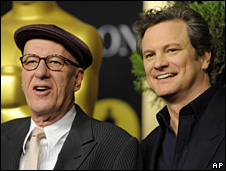 Throughout, the Brits are portrayed as snotty, emotionally constipated and ludicrously formal.

All of this provides a lovely sepia-tinted snapshot of a moment in time when the manners and social mores of the Aussies and Brits were miles apart. A real museum piece, and exquisitely-crafted cinema.

But any portrait of British and Aussie manners today - a Mike Leigh take, for instance - would surely focus on the similarities between us rather than the differences. In the cross-flow of cultural influences, have not the Brits become a lot more Aussie in recent times? Have we not come to share more of the same social mores and manners?

Britain is a far more egalitarian society than it was when I grew up. Class is not such a factor. Post-Diana, we are not so emotionally constipated. In fact, arguably we've become a country of exaggerated emotional responses. Like the Aussies, we love underdog success. The public reaction to the Scottish songstress, Susan Boyle, offer proof of both.

Perhaps we Brits use the word "mate" a lot more. Within BBC News, I've long thought that we greet each other with a cheery "mate" all the time because so many of our cameramen are Aussies. Within Britain as a whole, perhaps it is because we all spent so much of our formative years in Ramsey Street.

Tony Blair was sometimes called Britain's first Australian prime minister because of his classlessness and breezy informality. Ahead of the British election, it was also interesting to hear David Cameron's response on morning television when he was asked which he preferred, Coronation Street or EastEnders. "Neighbours" came his instant reply. The King's Speech also provided an illustration of the influence of soaps back home. After all, Mike from Neighbours - aka the actor, Guy Pearce - played the part of King Edward VIII. In recent years, The Sun has even launched a campaign to have Kylie Minogue's bottom heritage-listed.

If ever there were a modern version of The King's Speech, perhaps it would be scripted rather differently. "I'm on the loo" might come from the mouth of the actor playing the British monarch, temporarily indisposed on his porcelain throne.

PS: While we are on the subject of Anglo-Australian ties, a very happy birthday to Claude Choules, who is thought to be the world's last surviving combat veteran from the Great War. British-born, he know lives in Perth, and I had the pleasure of interviewing him about eighteen months ago. He was an absolute delight. It's his 110th birthday today. Well done, sir, or perhaps that should be good on ya, mate.