"Major announcement at 1pm SCG TODAY involving a senior Australian cricketer." As soon as that not particularly cryptic email from Cricket Australia landed in inboxes around the cricketing world, everyone knew that Ricky Ponting's tenure as Australia's captain could now be measured in hours rather than months or even years. In truth, nobody needed an email. As soon as Australia crashed out of the World Cup at the quarter final stage - a disaster for a country that hoisted the trophy in the last three tournaments - it was clear that the Ponting era had come to an end. 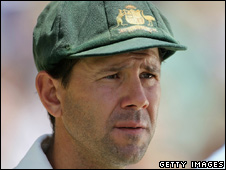 I'm in England, where the news of Ponting's resignation is a big deal. It's the headline sports story of the day. He's a figure who English fans love to hate, but sneakingly admire. A great batsmen, an extraordinarily tough competitor, though a tactically suspect captain.

As I've written before in this space, I've long thought that Ponting gets an unfairly bad press, not least from Australia's cricketing scribes. He was never a popular replacement for Steve Waugh, a legend among Aussie sporting legends, and his critics will claim that his success as an Australian captain came during the Warne/McGrath era when the team could virtually have run on auto-pilot. Certainly, as soon as Warne, McGrath, Gilchrist and co retired, we saw the end of cricket's unipolar world in which Australia was the sole superpower. Afterwards, Ponting's job was to manage his side's decline.

I first met Ponting at a fashion event soon after arriving in Sydney - we had both been dragged along by our wives - and he was charming, friendly and, best of all, extremely candid. Australia was just about to set about regaining the Ashes, and he was disarmingly honest about why his team had been beaten in England the year before. He was also confident they would beat England convincingly on home soil - not a bad call on the eve of a 5-0 series.

At press conferences, Ponting tended to avoid the dreadful "they gave it 100%" clichés and spoke much more intelligently about the nuances of the game. At those same press availabilities, however, he could be painfully thin-skinned, especially when he copped criticism from former players - and especially former captains - about his lack of tactical smarts.

His books, the Captain's Diary series, also revealed the good and bad. The supportive captain, who cherished the Baggy Green culture invented to a large extent by Waugh. The loving husband, and later devoted father. The dedicated pro who thought there was no better job in the sporting world than captaining his country.

But they also revealed him to be rather peevish at times. He used the books to settle quite a few scores, and once I remembering his complaining about the cost of laundry on an Ashes tour in Britain, which seemed a lesser concern for a multi-millionaire sportsmen. Recently, we've seen a few ugly outbursts on the pitch, which suggested he was buckling under the pressure of leading what by Australian standards was a fairly mediocre side.

Ponting has said he plans to keep playing at an international level. The great fear of Cricket Australia was that he would not want to play on unless he was the captain. And for my money he is still Australia's finest batsmen, even if his form has slumped alarmingly in recent series. Perhaps he will drop down the batting order.

So farewell Punter Ponting - a man who brought to the game much more of the good than the bad and the ugly.