So another of this country's great sporting cathedrals has been turned into something resembling a mausoleum. I was at the Sydney Cricket Ground this morning, having been given the task of finding crestfallen Aussie fans. Yet on the road outside, which on test match days is normally crammed with Aussies wearing green and gold, with zinc cream smeared across their faces like tribal decorations, brandishing inflatable marsupials and waving boxing kangaroo flags, there was hardly a local in sight.

This, for us Poms, is cause for double celebration. The taste of cricketing victory is always sweet, and never moreso than when laced with Australian suffering. 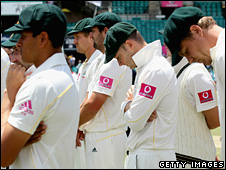 Of course, we, as Brits, are almost pre-programmed to gloat. We have also come to expect that Australia experiences great national convulsions whenever it loses to the English. Ideally, we would like to see news anchors breaking down, Walter Cronkite-like, on-air, flags at half-mast atop the Sydney Harbour Bridge and the Opera House not only enveloped in darkness but hosting concerts funereal in tone. In Austerity Britain, perhaps we not only like to think that is how Australia reacts, but almost need to think it.

Alas, we are dealing here with Assumed Australia rather than the real thing: a kingdom of the mind where the historical arithmetic is always being recalculated on some imaginary tally board, where ledgers perpetually need to be balanced, and where wrongs always need to be righted.

True, Aussies never enjoy losing to the English. For some, it hurts bad. But the truth is that the country will absorb this defeat without sinking into a nation-wide funk. Its self-esteem, buoyed by an almost recession-proof economy, simply isn't that fragile. And then there is the beach.

So in the absence of streets filled with weeping women and newspapers edged in black, what should we be telling London about Australia's response to England's lop-sided Ashes victory?

For a start, it is worth pointing out that the present side has not got a particularly enthusiastic home following. This is partly because when Australia lost its best players like Shane Warne, Glenn McGrath, Justin Langer and Adam Gilchrist, it also lost its most likeable stars. After Shane and his technicolour dreamcoat, the present crop are vanilla in comparison.

Ricky Ponting is not hugely popular, though I have long thought he gets an unfair press. He is much better than his headlines would suggest - although, as with his outburst in Melbourne, he sometimes brings them on himself. Certainly, he does not have the standing of Allan Border, Mark Taylor or Steve Waugh, his three predecessors. Nor does his temporary and perhaps long-term replacement Michael Clarke. In a country that has always respected workhorses, I suspect many think the New South Welshman is a bit of a show pony.

Sports fans here are also realists rather than sentimentalists or fantasists. After the retirement of Warne and McGrath, they knew cricket would no longer be a unipolar world with Australia as its sole superpower. Even if the sharp gradient of its downward trajectory has taken many by surprise, the national team was never going to withstand such a heavy depletion of resources.

My hunch is that Aussie spectators are more sporting than we give them credit for - although the mass evacuation of the MCG last week when England started to get on top adds weight to the counter-veiling view. "Well earned" reads the headline on the ABC News website this afternoon, and I do not think that there is a single serious-minded cricket follower in this land that thinks that Australia deserved to win. Other than a couple of days in Brisbane and the Test match in Perth, England were by far the better and more balanced side.

Aussie sports fans can spot mediocrity a mile off, and have witnessed it for years in its now highly fallible cricket team. After losing to South Africa two years ago, last summer they struggled even against the West Indies and Pakistan.

To put the Ashes into some kind of wider sporting and cultural context, perhaps it would be worth pointing out that Australian sports administrators are increasingly looking to establish a bridgehead in Asia. Aussie Rules has just held an exhibition game in China. The Bledisloe Cup is now contested in Hong Kong and Tokyo. The Australian World Cup bid also tried to turn the old "tyranny of distance" argument on its head by trying to persuade Fifa that Sydney and Melbourne were gateways to Asia.

Indeed, the Ashes are steeped in so much tradition that we all fall for the trap of describing the old, mono-cultural Australia rather than its new, multicultural and increasingly Asia-centric incarnation.

For all that, the sporting relationship with Britain, and especially England, remains by far the most important and defining. It is also an indicator of how the Old Country retains its permeating influence in sport, culture and the national life. No wonder the Barmy Army never tires of its favourite anthem: "God Save Your Queen."

At least Australians can take solace that the chant from previous tours down under about A$3 being roughly equivalent to £1 is no longer available to England's travelling hordes. This takes us Poms into trickier territory, for it is a reminder of how the world's economic centre of gravity has shifted eastwards, which, in policy circles especially, is a source of unease.

After the Melbourne test, the ABC cricket commentator Glenn Mitchell, whose analysis and wit always brightens the southern summer, said that Australian cricket had reached its nadir. He surely spoke a week too soon. I doubt whether he would have anticipated another thrashing in Sydney.

So the rebuilding process, already three years in the making, will now become more urgent. And who would have thought that its foundation stone could be a Muslim batsman born in Pakistan with the name Usman Khawaja?