The revitalisation of Anzac Day

"I had the distinct impression I was witnessing the end of a ritual, the last gasps of a ceremony which had lost most of its meaning."

So wrote the award-winning Australian journalist, Craig McGregor, as he watched the commemorations to mark Anzac Day in 1968.

"It is dying on its feet for lack of wars to sustain it," he observed. By the mid-1970s, at the fag end of the Vietnam War, Anzac Day merited little coverage in the pages of The Australian, which appeared to bear out his prediction.

Now though, Anzac Day, along with the Anzac story which helps popularise it, seems stronger than ever, and the day itself has "taken on the character of a quasi-religious festival" - in the words of the social commentator Hugh Mackay. 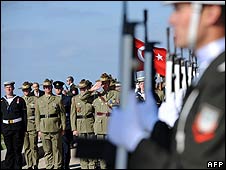 According to the veterans' organisation the RSL, the parades and dawn observances are attracting ever-swelling crowds.

Perhaps this revivalism provides evidence of a "new traditionalism" in Australia, which former prime minister John Howard was especially keen to encourage - and often help choreograph - and Kevin Rudd has been happy to sustain.

I always enjoy watching the annual Anzac Essendon/Collingwood Australian Rules football at the MCG, along with the military ceremony which precedes it. What I had not realised was that this modern-day tradition stretches back only as far as 1995. Like the veneration of the baggy green cap, it's a recently invented sporting custom.

I've written before about how war-time histories are one of the biggest growth areas of the Australian book industry - and just look at the number of walkers keen to tread the Kokoda Trail in Papua New Guinea, where Australians fought the Japanese in World War II.

Back in 2001, the number of walkers was 76. Last year, there were more than 5,500. Trekking along the Kokoda trail is all part of a revived Anzac spirit - and, tragically, as we have seen this week a treacherous one at that.

The politicisation of Anzac Day is really interesting, and I'd love to hear your thoughts on this. The former Labor Prime Minister Paul Keating wanted to reorientate the focus of the Anzac commemoration towards the Kokoda Trail and the Asian theatre. This emphasised how Australia had been left in the lurch by Winston Churchill, and fitted in with his prime ministerial narrative: the idea that the country should loosen ties with Britain and to look more towards Asia.

John Howard, however, wanted to revert back to the primacy of Gallipoli and the Anzac legend which flowed from it.

For a prime minister who always bridled at what he called the "black armband", or self-flagellating, view of Australian history, there were obvious attractions in the story of Gallipoli.

One commentator noted that the Anzac legend helped suppress "parts of Australian history that are difficult to deal with".

The Australian historian Martin Crotty has some really interesting things to say. He calls Gallipoli "an almost biblical creation story, a national equivalent of the Book of Genesis". By this assessment, it offered a more heroic narrative than the arrival of the first fleet in 1788, and the destruction of indigenous lives and culture which that led to.

And certainly it offers a more awe-inspiring starting point for many Australians than the sometimes lifeless negotiations which took the continent from being a group of separate colonies to a unified nation back in 1901.

As for my favourite description of Anzac Day itself, I think it comes from Donald Horne, the author of the Lucky Country, and speaks of the egalitarianism that is always celebrated on this sacred day.

"Death is a leveller," he wrote, and thus Anzac Day is perhaps best interpreted as "an expression of the commonness of man".