Australia no longer needs you...

So the reverberations of Australia's economic slowdown are to be felt 10,000 miles away in Britain, among the bricklayers, carpenters, plumbers and other people with trades who had considered heading down under to ride out the global financial crisis.

During the boom times, when skills shortages were the main brake on Australia's fast-paced growth, UK and other foreign skilled workers were targeted by successive Aussie governments.

Now, with unemployment reaching a near four-year high, they are being told they are surplus to requirements. The government says that Australian workers should not have to compete with their foreign counterparts. 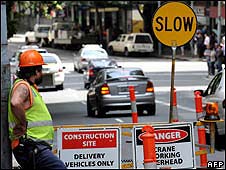 The announcement obviously confirms what we have known since before Christmas: that Australia does not offer a safe haven from the worldwide downturn.

Bricklayers, plumbers, welders, carpenters and metal fitters are no longer required, but Australia still needs doctors, nurses, engineers and IT specialists. You can read the ministerial statement here.

The changes come into immediate effect. If your application is pending then it will no longer be considered. If you are already in Australia, and have a skilled working visa it is still valid. If your visa is about to expire then your best hope of staying in Australia, I'm told by the Department of Immigration, is to seek sponsorship from your present employer. The Department can provide more specific information.

Immigration policy has long occupied a central place in Australian political life. After Federation, the Australian parliament's first piece of legislation was the Immigration Restriction Act of 1901, which became the cornerstone of the White Australia policy.

And although the former prime minister, John Howard, prospered politically by sounding tough on immigration - back during the "Tampa election" of 2001 when he famously commented: "We will decide who comes to this country, and the circumstances under which they come" - the number of new arrivals showed a big increase during his 11 years in office.

Cutting immigration will likely prove a popular move from the Rudd government, and has already been welcomed by the unions.

To disappointed Brits, the Australians could point to the recent actions of the Brown government which placed new restrictions on professionals from India and other non-EU countries.