Has the government of Kevin Rudd lost the plot? Or has he even got one? Is Australia's cleverest policy wonk still searching for a big, animating guiding principle? Less than a year after taking office, is the government a bit, well, Rudderless?

The prime minister's approval rating has fallen to 54%, the lowest since he took office last November. While he remains twice as popular as the new Liberal leader, Malcolm Turnbull, the most recent Newspoll poll suggests that more voters trust the Liberals when it comes to running the economy than Labor. That is a worry for Labor. 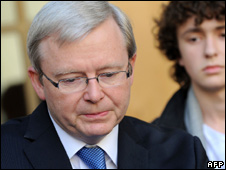 Former Labor Prime Minister Paul Keating, who is enjoying something of a revival at the moment - the brilliant musical which bears his name has been playing to packed houses - says that Rudd needs an overarching narrative. The opposition has also come up with a neat line that the Rudd government hit the ground reviewing, which has such resonance because it sounds so very accurate. Now it has started calling him "Kevin 747", because of his 46 days of international travel since taking office.

Certainly, Rudd's small-bore policies, like FuelWatch and its food equivalent, GroceryWatch, have been a bit of a flop. His education policies, grandiosely dubbed the "Education Revolution", are not particularly revolutionary. The phrase was appropriated from the former Labor leader, Mark Latham, and the policies were mainly appropriated from the former Liberal leader, John Howard. Admittedly, the emissions trading system promises a major reform, but John Howard advocated one, too, albeit on a slightly less ambitious timetable.

The grand gestures that attached meaning to his first few months in office were gifted to him on a plate by the Howard government. Ratifying Kyoto was easy. So, too, was saying sorry to indigenous Australians for past injustices. Having plucked and then feasted on these low-hanging fruit, the menu now looks a bit meagre.

Last month, as parliament reconvened after its eight-week winter break, Kevin Rudd delivered what was billed initially as important, agenda-setting speech where he would lay out his plans for the remainder of his three-year term. Then the prime minister's spin doctors tried to rein in expectations, and said that he would only be addressing education.

Some policies, like Rudd's idea for an Asian equivalent of a European Union, were announced with great fanfare and then followed by silence.

These days the most eagerly anticipated announcements come not from the government but the Reserve Bank, as it decides what will happen to interest rates.

When all those reviews publish their reports, new policies will no doubt flow from them. But this preference for reviews and studies tells us much about the prime minister. He is a process man, with a bullet-point mind rather than a visionary political imagination. For him, governing is about prose rather than poetry. The former diplomat and Queensland civil servant - he used to be the Queensland Premier's chief of staff - offers cautious "managerialism". After 11 years of conservative rule, should not a first-term Labor government offer something bolder and exciting?

Pushing for an Australian Republic might lend his government some crusading zeal, but his offer to Malcolm Turnbull to jointly come up with a timetable for a new referendum appeared like a political stunt designed to split the Liberal Party rather than a genuine attempt to accelerate the debate.

As your excellent comments amply demonstrate, there is clearly an appetite for a debate, and a high quality one at that. Many people seem unhappy with Malcolm Turnbull's new formulation that a Republic is off the agenda while Queen Elizabeth is alive. Though a Republican, tazitiger80 validates that stance, but I wonder whether many Australians will increasingly come to agree with scrapthejack that the country should set its own timetable.