The International Cricket Council has been keen to play down its meeting being held in Dubai on Monday. It may have been the first official talks since the attacks on the Sri Lankan cricketers in Lahore, but it has been presented as dealing with fairly routine business - the decision to move the Champions Trophy from Sri Lanka to South Africa.

A decision taken, we are told, not on security grounds but on weather conditions. Sri Lanka at the time the tournament was due to be held often has very heavy rain, and it was rain after all that washed out a previous Champions Trophy final there.

Indeed Monday's conference was so low-key that apart from its president David Morgan, hardly anybody was present in Dubai with Giles Clarke, chairman of the England and Wales Cricket Board, taking part in the teleconference from Trinidad, where he had witnessed England's latest defeat.

While the world waited to hear how the ICC would deal with the security threat posed by sport being targeted for the first time since the Munich Olympics in 1972, the ICC told us where the next Champions Trophy, a 50-over tournament that many feel has outlived its usefulness, will be held.

The problem is the ICC never has, and never will, have the powers to come up with a solution, let alone impose it.

Next month in Dubai the great and good of world cricket will gather as the ICC holds its quarterly board meeting. Giles Clarke and all the other cricketing heavyweights will be there, as will Chris Broad, the ICC match referee caught up in the Lahore attacks, who has raised some of the most potent questions about the security provided by Pakistan.

The ICC chiefs are keen to hear his first-hand account of that awful morning in Lahore. They would also like the Pakistan and Sri Lankan cricket captains to be there but cannot compel them to attend. The two captains can only attend if their two cricket boards allow them to. Nothing could be a better illustration of ICC being an organisation made up of autonomous cricket boards who do much as they please.

The ICC plays a peripheral part in their activities, such as providing match officials for international matches. However, it is the competing boards who decide where the matches are played, the match conditions including ground conditions - witness the farce over Antigua - and above all security.

Until recently this has not mattered. Ever since its inception international cricket has been run by an alliance between England and Australia, the reciprocal matches between the two every 18 months on a home-and-away basis being the only fixed points in the international calendar. 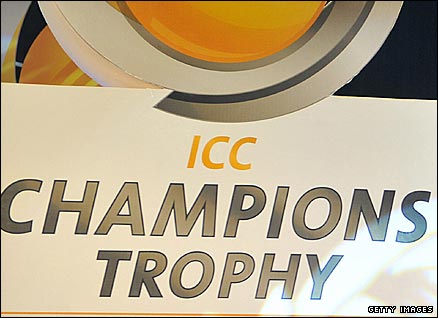 The Indians know they cannot play cricket on their own and they have worked hard to bring Australia in as their main partner. India and Australia now play each other once a year either in Tests or one-day matches. In the last year, following the successful launch of the Indian Premier League, South Africa has joined their ranks and this triple alliance now effectively runs cricket.

The Twenty 20 Champions League will see these three countries share the main money and it is not without significance that even Monday's decision of moving the Champions Trophy to South Africa was because Australia backed it.

The Indians have closely studied how England and Australia ran cricket when as founding nations they had the veto over all decisions. They quite like the limited powers of the ICC, have no desire to make ICC more powerful, and are keen to retain their ability to pull the strings as and when they want to.

The problem is the Indians often take so long to pull the strings that you are left wondering whether they know which string to pull.

The second edition of the IPL is a classic illustration. With little over three weeks to go there is no fixture list.

Security following the Lahore attacks is a huge issue and with India being a vast federal country, individual states have to sign off on security. But even before Lahore those involved in planning the IPL knew the dates of the Indian elections and that the arrangements for it would have an impact. So everything that was planned was tentative and subject to change.

It now seems likely that the match between Kevin Pietersen's Bangalore Royal Challengers and Andrew Flintoff's Chennai Super Kings will be held on 11 April in Nagpur, but that has changed many times already and could well do so again.

For a country that has a planning commission and talks endlessly of its five-year plans, India often doesn't take a decision until the last possible minute. In this regard Indians would easily win any gold going and teach the Greeks, who caused the Olympic movement such palpitations in the months leading up to Athens Olympics, a trick or two.

If cricket is to be properly run by its new world order, India needs to demonstrate it can exercise power when running tournaments which command worldwide interest far beyond its borders. It also needs to show it can live up to universally accepted international standards in terms of timing, location and security arrangements.