The credit crunch means West Ham's plans to move to the Parcelforce site near the old Boleyn ground, let alone the even longer shot of the Olympic Stadium, may now be ditched.

I am told a third plan winning great favour at board level is to extend the east stand and build around the corners of the ground, so increasing the capacity from the present 34,000 to about 50,000.

The plan has many advantages. Income will increase by about £12m a year and it will cost about £50m.

Contrast this with the likely cost of about £300m for the Parcelforce land, a difficult site for redevelopment.

As for the Olympic stadium, this would mean dismantling the stadium being built for the 2012 Games and starting again, which would cost about £500m.
And there is no certainly that the Olympic authorities would go for that in any event. 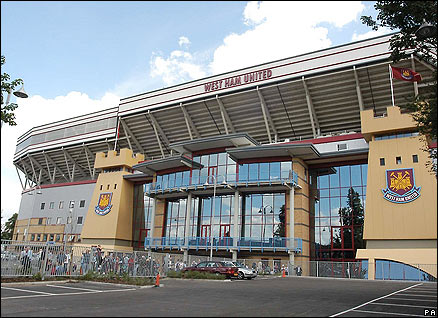 As for the Parcelforce land there are a lot of questions to be sorted out regarding developing the right transport links and who might provide the money.

West Ham would certainly be looking for public money, either from local authorities or central government. And how realistic that might be in the present climate is not hard to imagine.

Not that redeveloping Upton Park does not have problems. Fans will have to put up with a great deal of inconvenience for a season and the club will suffer from reduced income. But the view gaining ground is that in a time of recession this may be the best option.

However, even here the club will have to negotiate with the local authority about increased traffic congestion once the redeveloped ground opens. The roads around Upton Park are very busy on match days and would be even worse if capacity were to be increased to 50,000.
But are these stadium plans, even an expanded Upton Park, not just pipe dreams?

With the winds of recession threatening to assume gale proportions and the West Ham owner facing huge problems in his native Iceland surely the more pressing issue is whether West Ham will have to be sold?

I am told the club's owner has received a number of enquiries but nothing remotely like an offer, nor has the club been put up for sale.

Much depends on what the Icelandic owner, Bjorgolfur Gudmundsson, needs to do to take care of the impact on his investments as a result of the financial crisis that has overwhelmed his native country. If his situation in Iceland dictates a sale then it is hard to see how West Ham can remain unaffected.

So while club officials may work out different stadium plans, nothing will be decided until the club's future is settled. This means that whatever may be planned for Upton Park, the real decision about the club will be made in the financial corridors of Reykjavik.

That is modern football for you.