Olympic cities in the week before the Games begin are like performers before a long-awaited first night - a mixture of hope, anticipation and some nerves.

Beijing is no different, although my first impression is Beijing is more nervous than some cities such as Sydney, Athens, Turin or Salt Lake were.

I was struck by this the moment I landed at Beijing's airport, an airport that makes you realise how limited Heathrow's Terminal 5 is. 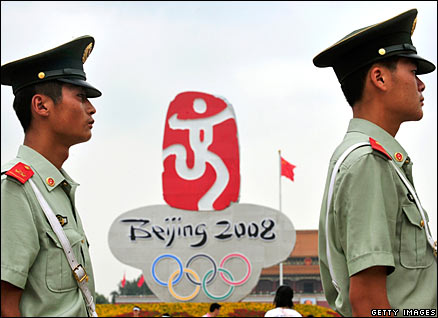 The nervousness seemed to extend even to the immigration officers. This is not as surprising as it seems.

As an Olympic accreditation journalist I was coming in not on a visa granted by the Chinese embassy in London but on a laminated Olympic card which has all sorts of numbers and letters meant to make sure that over the next month I can get into all the right Olympic venues and stadiums.

This is of course a standard requirement, part of the deal the IOC does with an Olympic city. But in a country where the state does everything and passes and permits are all state documents, getting used to official documents authorised by another body, albeit an international sports one, takes some doing.

This may explain why the accreditations are checked so often. Not only are they checked when we enter the media and broadcast centres but they are also checked before being allowed into the press conference rooms.

I have just returned from a visit to the media room set up in the IOC hotel and had the unusual experience of having my pass checked not only when I entered the complex but before I was let into the media work room.

There security staff standing under the gaze of large pictures of chairman Mao and Chou En Lai toasting foreign dignitaries made sure my credentials matched.

However, having said that, I must say the security staff have, at all times, been very polite.

Indeed, I have rarely met such polite security checking - saying "Please" and "Thank you" at all times.

The contrast with Salt Lake, where the security was tight - understandable as they were the first Games since 9/11 - is vivid. The US security was often officious and, at times, rude. So far, the Chinese security has seemed a bit excessive but never discourteous.

It could be argued that they have not been intrusive enough. After all, they allowed a Korean film crew to get into the opening ceremony rehearsal at the Bird's Nest stadium the other day. It ended up on the net to the great anger of the Chinese.

There have also been stories of other people getting into venues on fake passes, but I suppose in a land where counterfeit goods are available everywhere we should not be surprised by counterfeit Olympic IDs.

Beijing does seem to be delivering on its promise that it would deal with transport bottle necks.

If you have a car that can go on the reserved Olympic lanes then getting round Beijing is no problem. But even without such a privilege, there are certainly fewer cars than I have seen in any recent visit to Beijing - due to the reduction measures introduced by officials here in an attempt to reduce smog.

There may also be fewer Chinese in Beijing. Locals leaving an Olympic city is not a new phenomenon. This happened in Athens in 2004 and it is understood Londoners will get away for holidays in August 2012.

But that is voluntary. Here the government appears to be making sure Chinese do not come to the city.

I have been told that people who live near an Olympic venue, even within a five-minute drive, require a pass to enter their own homes. And they would require special passes to have relatives and guests visiting them during the Games.

The Chinese government works in mysterious ways. Take the row over internet access of which much has been made in the last few days.

The story has many fascinating aspects. There is the question of what the IOC knew and who made any deals with the Chinese. Kevan Gosper, a very senior IOC member, chairman of their press commission, did not know the Chinese would allow access to only some sites and this shows, if nothing else, lack of communication within the IOC.

The initial Chinese response was that they had given sufficient access and, following a meeting with the IOC, the Chinese did open up more sites.

So, as I found on a visit to an internet café in Beijing, you could access the BBC Chinese site, Amnesty International, Reporters without Borders and even a Free Tibet site. But, of course, not Falun Gong.

A good news story for the Chinese, you would have thought, but the Chinese government did not seem to want to talk about.

Indeed, it has been difficult to get Chinese officials to talk to us about this positive step for China.

After one Chinese press conference, when again there was little to write about, free food was provided to journalists prompting one reporter to comment, "I wish they would give us some news and make us pay for the food."

Let us hope, as the Games begin, China grows in confidence and the officials become less media shy.