Back in the 1990s, following the collapse of the Berlin Wall and the fall of communism, there was much talk of a peace dividend. We all know what happened to that.

But, perhaps, it is time to speak of an Olympic dividend.

What do I mean by Olympic dividend? I mean Britain staging major international sporting events and Britain doing well in them.

This weekend's events in Manchester where Great Britain dominated the World Track Cycling Championships and which also made the media sit up and take notice, has made me think that we are seeing the first part of that Olympic dividend. The cyclists in Manchester last weekend paid us a very bankable dividend on both counts. Both parts of this dividend cheque are important.

The old cliché of one swallow may not make a summer holds, but this event has a significance which goes much beyond the sport.

Let us go back to the London winning the right to stage the 2012 Olympics. Before that magical night in Singapore when London beat the favourites Paris there was a deep-seated feeling that Britain could not win such contests. Many, including myself, who argued that we should bid for 2012 felt that if we won, it would make Olympics and Olympic sports once again important in this country.

The events in Manchester provide tangible and welcome proof that those who wanted London to bid were not wrong.

The first thing to be said is that this World Championships showed how useful the Velodrome in Manchester built for the Commonwealth Games of 2002 is now proving to be.

The importance of such venues is that it means this country is able and willing to host such championships and that is no small matter.

In that long period when Britain failed to get the Olympics - recall Birmingham and Manchester twice failed to get the Games - I spent much time asking Olympic officials of various sports why this was the case.

The feeling in Britain was that the men and women who decided such things did not like Britain and had it in for this country. The refrain I heard time and again is that they will never vote for us - they hate us.

However, when I spoke to the Olympic officials who were supposed to be anti-British they recalled with warmth how back in 1908 and 1948 Britain may have come to the rescue of the Olympics by staging the Games when no-one else could, but said Britain had turned its back on the Olympic movement. Britain, said these officials, gave the impression it did not care for any sports other than football.

For evidence they pointed to the fact that Britain rarely bid to hold World Championships of the various sports that make up the Olympics programme.

And, of course, we had humiliating proof of that over the Picketts Lock fiasco and Britain's decision to return the 2005 World Athletics Championship after it had won the right to host it - an action which a third world country would be ashamed of, let alone a country with the fourth largest economy in the world.

The Government decided it could not spend the money required to make Picketts Lock ready.

Recall how the Government tried to offer Sheffield instead infuriating the IAAF and meaning that the Championships went to Helsinki instead.

But after Singapore, Britain bids for major Championships and gets them - it is as if a prodigal son has returned.

If the staging of the Championships was important, then the performance of the cyclists showed how far certain Olympic sports have come in recent years. 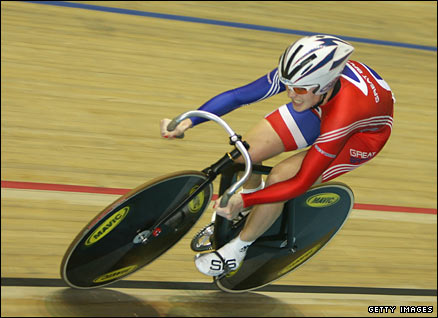 The lottery money being provided to these sports and the various programmes like the World Class Performance Plan and the Olympic Podium Plan has been of enormous benefit.

Older cyclists like Chris Hoy who once had to scrounge around now have security and it has certainly played a big part in the rise of Victoria Pendleton, who is now such a star that at the weekend she easily dominated the headlines, even overshadowing footballers.

It could be argued that Pendleton is a good cyclist, very marketable and so is an exception, but the way the media has handled the British success makes me think this is not a flash in the pan.

A lot more needs to be done before we right the imbalance that has developed in our sports where it seems all that matters is football and nothing else, but if we keep getting such Olympic dividends then by the time 2012 comes that may not be impossible.